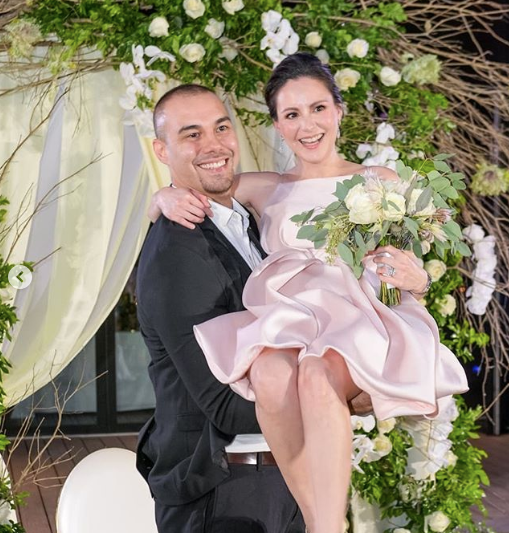 For their 10th-year anniversary, Chesca Garcia managed to surprise husband Doug Kramer when all along, he thought he was surprising her.

Unknown to Kramer, his wife had been planning a ceremony to renew their vows and invited loved ones to the Grand Hyatt Manila last Oct. 9. Initially, the couple had intended to have a ceremony next year in their new home.

A video of the event was released today, Oct. 16 on the Kramers’ social media accounts.

Just a week ago, I was planning to surprise Chesca with 10 gifts with a band and an intimate dinner on our 10th yr anniversary! Just the two us and the kids. But little did I know, Chesca was planning it the other way around, the surprise was on me! It was our 10th yr renewal of vows!The build up was crazy, because originally we wanted to have our renewals in Boracay, but it closed down, then we tried Tagaytay and Baguio, but it that didnt work out too. So we just mutually decided to have it sometime early next year in the new house for an intimate celebration. Well, in my mind that was the plan. hahaha!Chesca got me big time! A pleasant surprise indeed! 10 years ago, we started this journey alone, then along the way, had Kendra, Scarlett, and Gavin. Thats why this celebration was extra special! I love you honey! Hope you guys enjoy the video guys! Here it is! :)And of course, a big big thank you to our family from Treehouse Story, I guess you guys have a goal to make us cry with your heartfelt videos! You guys are a part of Team Kramer, and we're honored to have you guys film us for more years to come! We love you guys! 👌Coordinator: Teena Barretto EventsPhotographer: PAT DY PHOTOGRAPHYEvent Stylist: Jo ClaravallVenue: Grand Hyatt ManilaSpecial Mention to: Del Fabric Softener

“Just a week ago, I was planning to surprise Chesca with 10 gifts with a band and an intimate dinner on our 10th yr anniversary! Just the two us and the kids. But little did I know, Chesca was planning it the other way around, the surprise was on me,” wrote Kramer in a Facebook post.

The highlights include the moment the cager walks into the outdoor venue of the ceremony, believing that he was going to surprise his wife once again. Then, seeing the faces of friends and family, he becomes teary-eyed as he realizes what had transpired.

Their three children Kendra, Scarlett and Gavin walked down the aisle before their parents exchanged vows once again. While Kramer was emotional, Garcia looked triumphant for having pulled off the stunt without raising her husband’s suspicions.

“She really played me honestly,” said Kramer, who revealed that it was the first time he had ever been surprised.

Friends such as Danica Sotto and JC Intal gave testimonies to the couple’s lasting relationship.

“For how many days, your wife couldn’t sleep, super serious,” said Sotto.

“The mission [was] to make you cry and for you to know how special you are to me,” said Garcia.

Though Kramer did not have vows prepared, he still paid special tribute to his wife and gave her a ring and a wedding band. “People say when you get married, it’s gonna go downhill. Hell no,” he said. “What more could a guy ask for?” JB