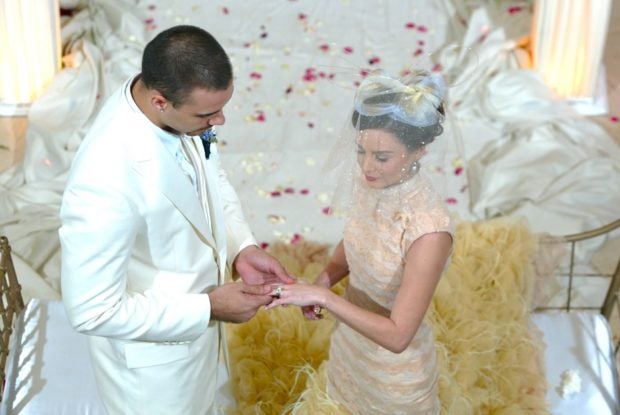 Team Kramer — which consists of cager Doug Kramer, wife Chesca and their brood of three — probably did not expect to stir controversy when they shared well-intentioned Bible verses on marriage with a matching illustration.

“Wives, submit yourselves to your husbands, as is fitting in the Lord,” the verse begins.

The visual shows a hierarchy with Jesus Christ at the top, husband in the middle, and the wife beneath the husband. Children are at the bottom with the label “managers of the home.”

According to the graphic, the husband is also expected to protect the family and provide for them.

While many agreed and defended the couple — considering that the country consists mostly of Catholics and Christians — others expressed their misgivings.

A man being viewed as the head of the household was contentious and outdated for some, particularly when it came to dictating gender roles.

“Sa panahong ito marami na ring wives na provider sa family so this is not applicable to all,” said one.

“A husband SHOULD also take care of the children and the household, and not be involved only as a disciplinarian. A woman CAN provide for her family and protect them as well,” read another comment.

“Why refer to submission as anything else but an outdated and harmful reminder of the past when women were considered property then later on lesser human beings?” said a netizen.

Others also pointed out that the message doesn’t take into consideration the situation of single parents and same-sex couples.

“God has given us specific roles”

The couple reflected on their conventional views of marriage, and in their explanation, pointed out that the Bible is a “blueprint for life.”

In a clarification, Doug wrote, “God designed marriage (not me or my partner) for both husband and wife to have very important roles. And that doesn’t mean the wife’s role is lesser of the husband.”

He said he respects Chesca as an equal. “Her input and suggestion matters because she is the mother of my kids and I love her” but “this doesn’t take away my leadership.”

On their Facebook page, after the verse, an explanation reads, “God has given us specific roles to fulfill and if we are able to follow those roles and His way (since he made the manuscript and blueprint for life).”

“We have the choice to follow Biblical principles or not. Each is entitled to their opinion, but for me I’d want to follow the user’s manual,” the explanation continued.

Chesca added, “I also understand the reversal of roles. I have friends who are in that situation. As long as they agree wholeheartedly with their roles and are happy with it. I do not see anything wrong with it.”

Doug also gave input on when a wife could take the lead.

“My opinion is, to the wives, if your husband doesn’t know how to handle the families finances, I suggest you take over. But teach him too the proper way, so in the future, he may possibly lead and may make better decisions. A marriage is a daily working partnership.”

Chesca and Doug have been married for nine years, with Chesca choosing to leave her showbiz career to become a full-time mom.

On the side, she hosted a show called “Mommy Manual” and has endorsements. Doug has been the breadwinner of the family as a Philippine Basketball Association player. JB