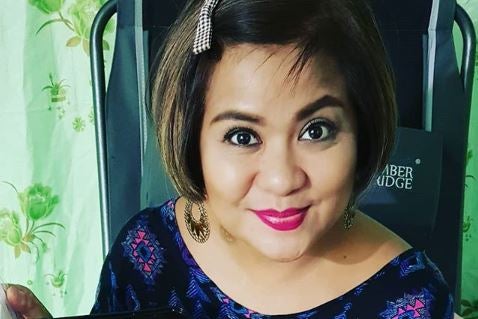 When it comes to Edsa, there seems to be no king of the road as everybody, in one way or another, gets affected by its irremediable traffic. But while some choose to bemoan and rant about Edsa traffic on social media in a raw manner, actress and comedian Candy Pangilinan did so in a more creative fashion.

Pangilinan recently decided to while away her time and channel her inner poet while stuck in Edsa traffic during a rainy day. She took to her Instagram on Oct. 3 and shared to her fans her poem entitled “Ang Lakas ng Ulan.”

Pangilinan’s amusing poem involved her writing about the motorcycles on the road that usually race cars along the way. She also mentioned her sad and happy memories when she emotes during rainy days.

It seems, however, that writing poetry is not enough to combat Edsa traffic, as an hour after writing, Pangilian shared that she was still stuck on the road.

Pangilinan added that after one hour and 15 minutes, she resorted to amusing herself since she really needed to use the restroom.

Apart from Pangilinan, other celebrities have lamented its traffic on social media, such as Megastar Sharon Cuneta. Cuneta recently found herself stuck on Edsa while on her way to rehearsals for her 40th anniversary concert, and wondered if it would be better if she just went home instead.

Anne Curtis, meanwhile, hopped on a helicopter last March to beat Manila traffic and arrived to work on time. Erwan Heussaff and his friends also embarked on an Edsa traffic race using different modes of transportation last April. They realized that among taking the bus, train, biking and running, running was the fastest when it came to traveling from Makati to SM Megamall in Ortigas.  /ra