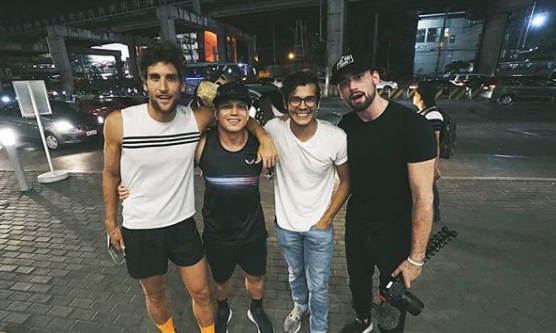 Perhaps if there’s something people in Manila can collectively hate, it would be the traffic that pervades and affects all those who live and work in the metropolis, notwithstanding one’s status and bracket in life. Erwan Heussaff and his pals Nico Bolzico, Bret Maverick and Arnold Aninion put themselves to a Herculean task on April 6, by embarking on a “Rush Hour EDSA Traffic Run” from their Makati office to SM Megamall in Ortigas.

Erwan decided he’ll be cycling, Nico will be running, while Bret and Arnold will be taking the train and bus respectively for the 7.2 kilometer journey. Erwin shared the vlog just two days ago on his official YouTube account where they documented each of their journeys with their mode of transportation of choice.

“I hope I don’t die. Erwan sent me in this deadly, deadly mission,” Nico said as he ran down the streets of Makati.

Bret and Arnold, on the other hand, seemed to have encountered a problem during the race because they didn’t know how to get to the bus and train station, taking almost thirty minutes just with their jeepney ride to the said stations.

Erwan, meanwhile, encountered his first bout of traffic in Chino Roces, “Okay, first batch of traffic is Chino Roces going to Arnaiz street,” he says to the camera while on his bicycle. “…Just gotta watch out for the motorcycles… It doesn’t help that there are cars parked on the side of the street where they shouldn’t be.”

It’s easy to think that the train is the fastest way one can take to get to a destination, but the results of these men’s experiment prove otherwise. In their case, running ultimately trumped cycling, the train and the bus.

Nico only took 32 minutes for his 7.2 kilometer run, a laudable triumph that got him 1st place in their race. Bret arrived second, coming in with 51 minutes on the clock via train. Erwan came 3rd, taking exactly an hour on his bike, while Arnold took 1 hour and 30 minutes via bus.

Their little experiment may ostensibly seem like just another fun antic for their followers, but it opens up to more  issues. The elephant in the room, for example, was the state of Nico’s face mask that a lot of the netizens pointed out. Before starting the race, his mask was white, which eventually turned black by the time he got to SM Megamall, a worrying effect of pollution and smoke-belching vehicles.

Erwan, earlier, also commented on the illegally parked cars on the streets, which make transportation harder as it adds up to the cause of traffic.

Erwan wrapped his video up by saying, “You know it’s a reality that sinks in when you think about this because I know a lot of people and I’ve worked with a lot of people who do commute like this daily. I can only imagine how hard and frustrating it must be for people who live far and who need to be forced to take inadequate modes of commuting and transportation.”

“I don’t care who you are and what income bracket you come from. If you live and work in Manila and the National Capital Region then traffic does affect you one way or another.”

Erwan then expressed his hope that the message comes out and people will start taking steps in terms of policies, wishing that those in the government “really will try to make a change for everyone because it would be really better for absolutely everyone and I truly believe that we should never lose hope when it comes to these things.” JB

A birthday revelation: What Erwan Heussaff loves about Anne Curtis