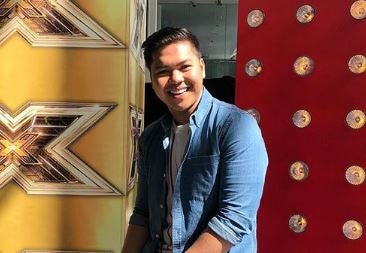 Filipino singer-songwriter Rhap Salazar recently took to social media to express his dismay after his audition in “The X Factor UK” wasn’t aired on television.

Salazar shared to his fans that he got a standing ovation from everyone during his audition and four yeses from the judges. He also got through the next level, but didn’t make the cut during deliberations.

“UNFORTUNATELY, MY X FACTOR AUDITION WAS NOT AIRED ON TELEVISION,” wrote Salazar on Instagram last Sept. 24. “I sang my acoustic version of ‘I Will Always Love You’ by Whitney Houston. I got 4 yesses from all the judges and standing ovation from everyone. Every reaction from the audience was really unexpected and memorable one.”

Salazar’s arena audition was filmed last July at the SSE Arena in Wembley, Lndon. As per Salazar, he doesn’t know why his audition wasn’t aired, whereas the performances of fellow Filipinos 17-year-old Maria Laroco and Sephy Francisco, who also auditioned on the show and got the judges’ approval, were shown on television.

“I actually have no idea why they did not air my audition,” Salazar said. “I believe all things happened for a reason and there’s no reason for me to stop reaching for my dreams and doing what I love that is to sing for the world.”

Unsuccessful he may have been on his time at “The X Factor UK,” Salazar remains steadfast and determined to continue following his dreams. He, too, did not forget his supporters as he extended his gratitude to them for following him on his journey.

“Thanks to all the people who believed in me,” Salazar said. “No time for giving up. Tuloy ang buhay.”  /ra