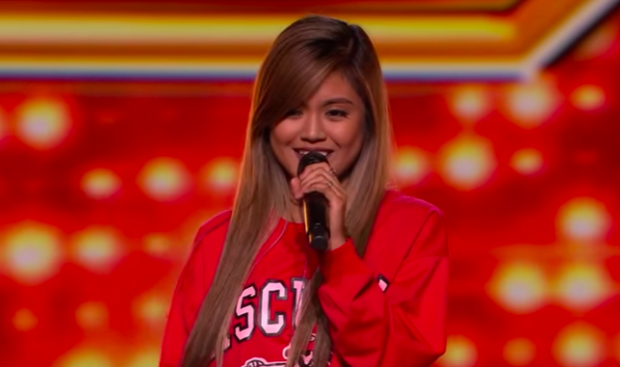 One 17-year-old Filipino brought the house down and the audience and judges up on their feet during her audition at “The X Factor UK” recently. Maria Laroco put the pride in Pinoy when she sang her rendition of Prince’s classic “Purple Rain” to X Factor judges Simon Cowell, Louis Tomlinson, Ayda Field and Robbie Williams over the weekend.

The video of her audition was shared by the official YouTube account of “The X Factor UK” and “Talent Recap UK” last Sept. 8, which showed the young Laroco on stage wearing a red sweatshirt and jeans.

When asked by Cowell what gave her the strength to come all the way to the United Kingdom to audition, Laroco tearfully shared that it had always been her dream to be a superstar.

“Since I was a little girl I’ve always wanted to be an international superstar. I want to be big, so that’s why I’m doing this because I love to do it and this is my dream,” said the emotional Laroco.

What came after was a breathtaking performance of Prince’s “Purple Rain” which had the audience and the judges — including the hard-to-please Cowell — up on their feet and in fervent applause.

Judge Tomlinson was blown away by Laroco, who commended her for an incredible performance. “That was absolutely incredible. Incredible. To do what you’ve just done at 17 vocally, you absolutely blew me away. Well done, well done.”

Field, too, only had praises for Laroco. She gushed, “OMG! You just bossed that stage, well done!”

Meanwhile, Cowell asked Laroco if there was ever a moment when she doubted herself.

“No, I never gave up on my dreams. A lot of times people told me that I can’t do it, that I’m not good enough…” replied the tearful Laroco before pausing to compose herself.

“Look what you did to the audience, that hasn’t happened a lot,” added Williams as he gestured to the cheering crowd. “You’re amazing. I’m going to kick this off and I’m going to give you a massive yes.”

Field, too, gave Laroco her approval. “I’m gonna give you all the yeses I can possibly give you. YES,” she said.”

“Maria, thank you so much for auditioning for this show; it’s a yes,” Tomlinson added.

As for Cowell, he went beyond the “billion yeses” and told Laroco that he will be giving her “infinity yeses.”

“So you are 17 years old and you’ve flown all the way which is a long trip. You’ve taken on probably one of the biggest songs in the world,” Cowell told her. “I’m gonna go beyond the billion yeses, I’m going to give you infinity yeses.”

Jabbawockeez dances in Makati, on top of jeepney to thank 2M subscribers