‘Assassination Nation’ wants to get under your skin 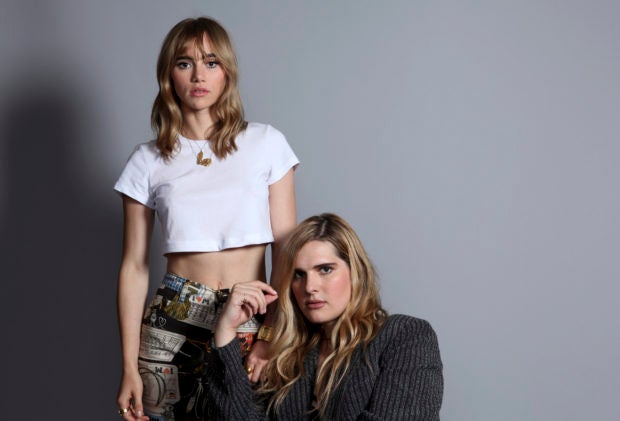 In this July 19, 2018 file photo, Suki Waterhouse, left, and Hari Nef pose for a portrait to promote the film “Assassination Nation” at Comic-Con International in San Diego. The film opens Friday. Image: Invision/Rebecca Cabage via AP

LOS ANGELES (AP) — “Assassination Nation” is trying to make you uncomfortable. The film even starts out with about a dozen “trigger warnings” previewing the horror that is to come in this internet age Salem witch trial about four teenage girls who become the enemies of an entire town when a hacker stars leaking individuals’ information.

Morality, sexuality, female nudity, homophobia, misogyny, pornography, pedophilia, mob mentality and gun violence are just a few of the subjects and taboos addressed in writer-director Sam Levinson’s purposefully insane film. According to Levinson, it is simply about, “All the anxieties and pressures and fears of growing up in the digital age.”

Out Friday, it’s the kind of film that could become an instant cult hit, or the subject of outrage, but it’s one audiences will want to discuss after. It’s as provocative as it is divisive, but those who are on board are really and fully on board. Levinson said its unabashed outlandishness helped sell it to financers, even with its disquieting images and little-known cast.

“It’s a terrifying script. Truly terrifying,” said Odessa Young, the 20-year-old Australian actress who plays the lead character Lily. “You’re meant to look at this as a mirror and examine yourself and examine the world that you live in.”

Suki Waterhouse, 26, who plays one of the girls, Sarah, said some of her agents even cautioned her against doing the film. That made her want to do it even more.

“I don’t expect everyone to like this movie,” Waterhouse said. “I think some people are going to think it’s exploitative or disturbing. But I love the juxtapositions of what people feel about it.”

With a healthy buzz after its midnight premiere at the Sundance Film Festival earlier this year, Neon, which released “I, Tonya”, and AGBO, a new production company led by “Infinity War” directors Joe and Anthony Russo, acquired it for $10 million, one of the biggest deals of the festival.

But the film has not been without its own controversies. Hari Nef, a 25-year-old American actress who plays the transgender character Bex, said that she thinks people are carrying prejudice toward the film because of the director.

If there is a “type” of person who would conjure up a film like “Assassination Nation”, Levinson, who’s the son of “Diner” writer-director Barry Levinson, and also white, straight and male, probably wouldn’t be anyone’s first guess.

“I think that some people walk into it wanting to find all of the reasons why this person shouldn’t have made it,” said Nef. “I do think that Sam is an exception. I’m fascinated by the white, straight, male critics who are like, ‘This is exploitative and within the male gaze’…But if you talk to (the cast), we’ll tell a different story.”

Singer Abra, who plays the fourth girl, Em, praised Levinson’s writing. Like Bo Burnham did with “Eighth Grade”, Levinson was able to find all the source material and inspiration she needed to capture the voice and anxieties of modern teenagers just by looking on the internet.

“I was surprised how Sam got the dialogue down,” Abra said. “It was like talking to my best friend. It didn’t feel unnatural.”

Levinson wants the film to start a dialogue, although he can’t help but laugh that some think it’s a revenge film. He doesn’t see it that way at all.

“I think ultimately it’s a story about surviving the digital age, surviving the country at this moment. It’s about listening to one another, it’s about having empathy with those with whom you may disagree. It’s about figuring out a better, healthier way to co-exist. I don’t think we’re as inflexible and strident as our internet personas make us out to be,” he said. “I hope people leave the theater feeling emotionally drained and like they’ve been through something, but you know, with a little bit more empathy in their heart. I also hope people have fun.”

Young noticed that the film has inspired different reactions from audiences depending on age. Older generations, she said, think of it as a fantasy. To the younger ones however, it’s reality.

LOOK: From scary to cute, the sights of Comic-Con