LOOK: From scary to cute, the sights of Comic-Con

SAN DIEGO (AP) — The actors promoting their latest films and television series aren’t the only stars of Comic-Con International— the thousands of fans who don elaborate costumes to the convention give it a one-of-a-kind vibe. 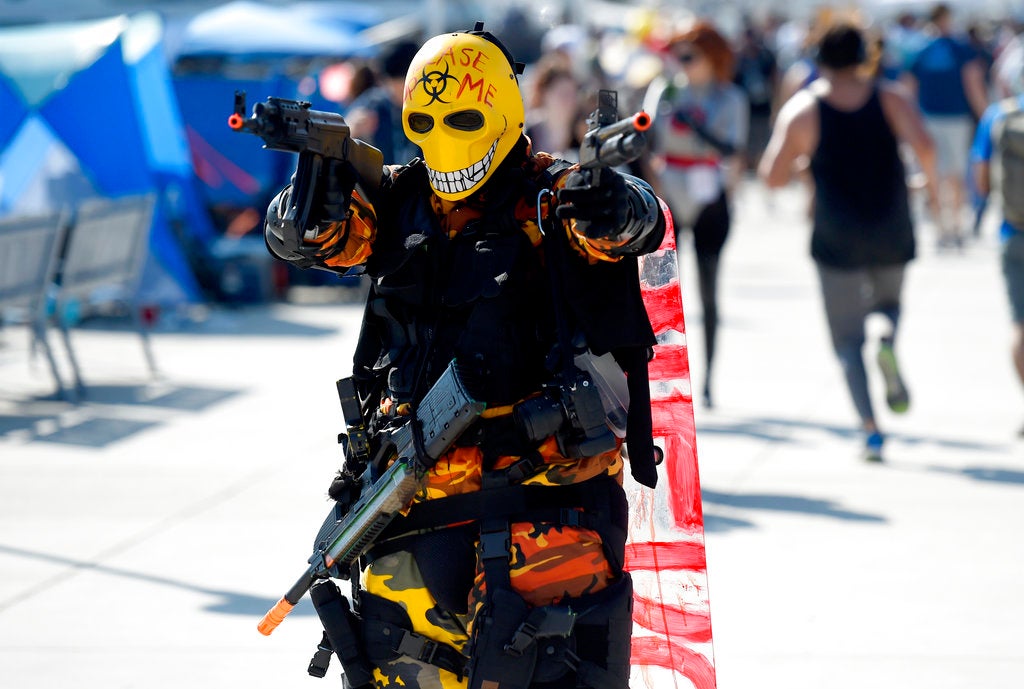 Nicholas Pryor, of San Diego, poses as the character Tyson Rios from the “Army of Two” video game during day one of Comic-Con International on Thursday, July 19, 2018, in San Diego.(Photo by Chris Pizzello/Invision/AP) 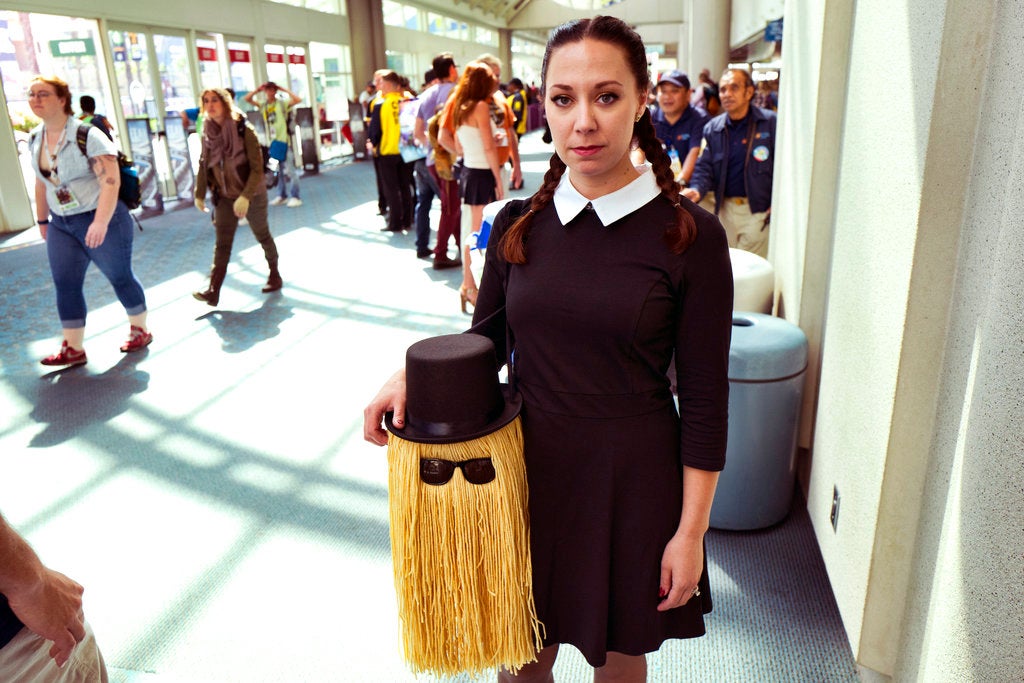 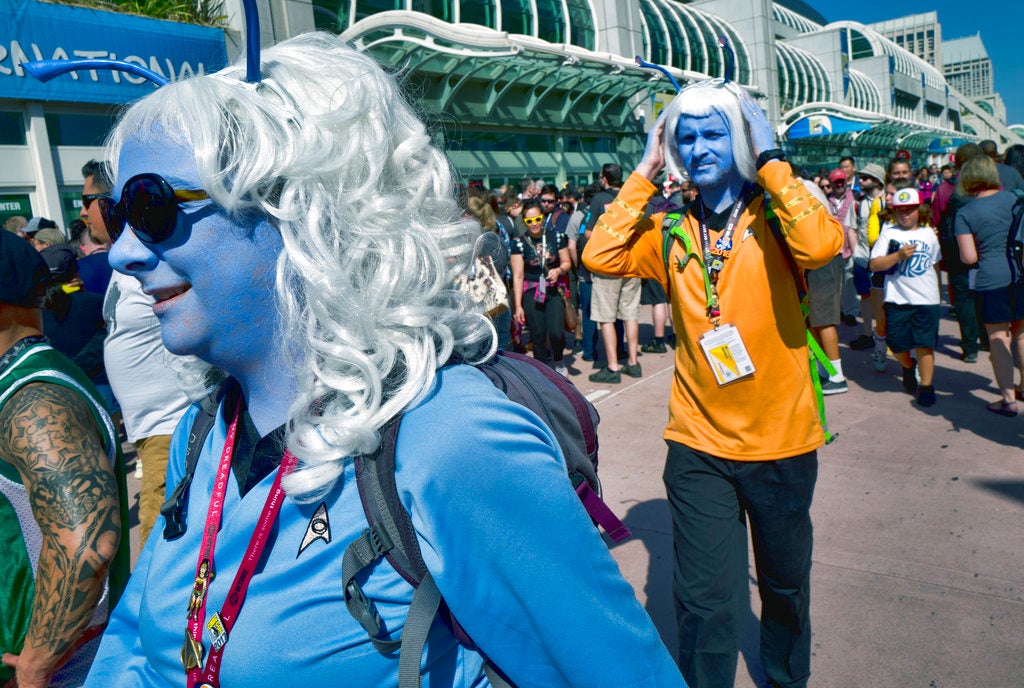 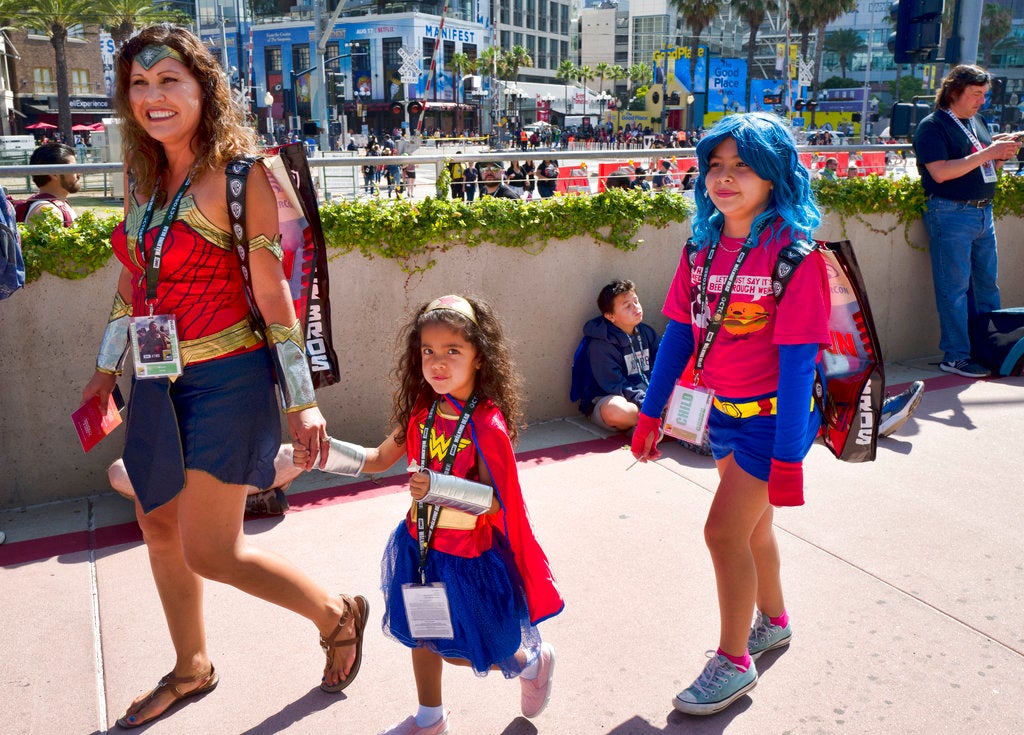 Dressed as Wonder Woman, Issa Jamie, 5, center, is joined by her mother Miriam and sister, Bonnie as they arrive for 2018 Comic-Con International at the San Diego Convention Center, Thursday, July 19, 2018, in San Diego. Image: Photo/Richard Vogel

The four-day extravaganza provides some amazing mashups of pop culture — zombies mingling with superheroes from various comics and plenty of other custom creations. Where else would security have to screen the gear of fans dressed as the Ghostbusters? (All fake weapons, whether wielded by heroes or villains, get checked out.) 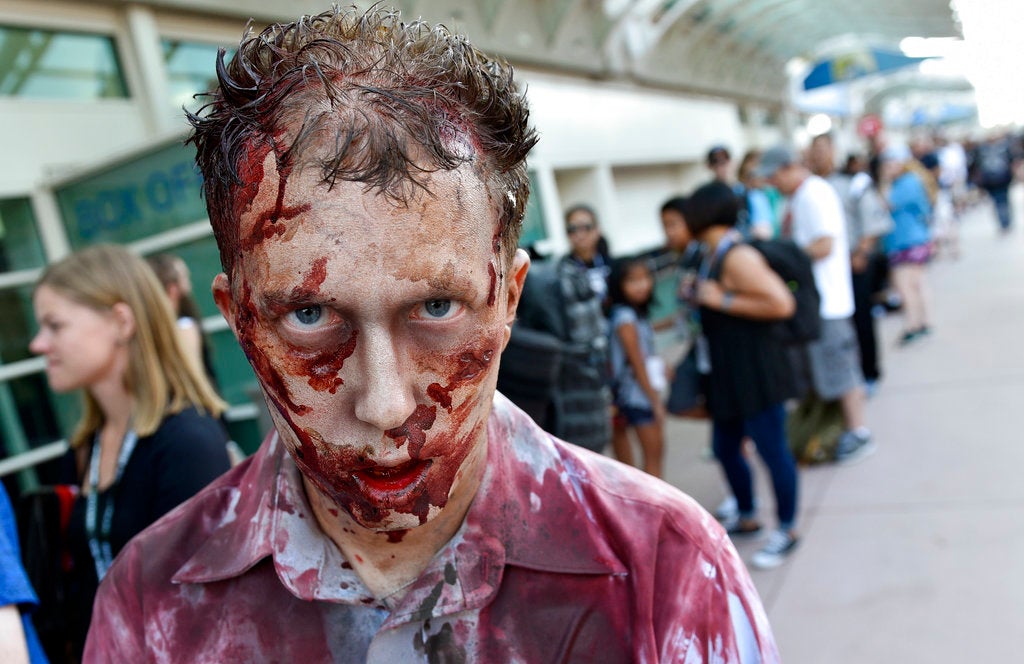 Brandon Keller, of San Diego, poses as a zombie from the television series “The Walking Dead” as he waits in line for Preview Night of the 2018 Comic-Con International at the San Diego Convention Center, Wednesday, July 18, 2018, in San Diego. Image: Chris Pizzello/Invision/AP 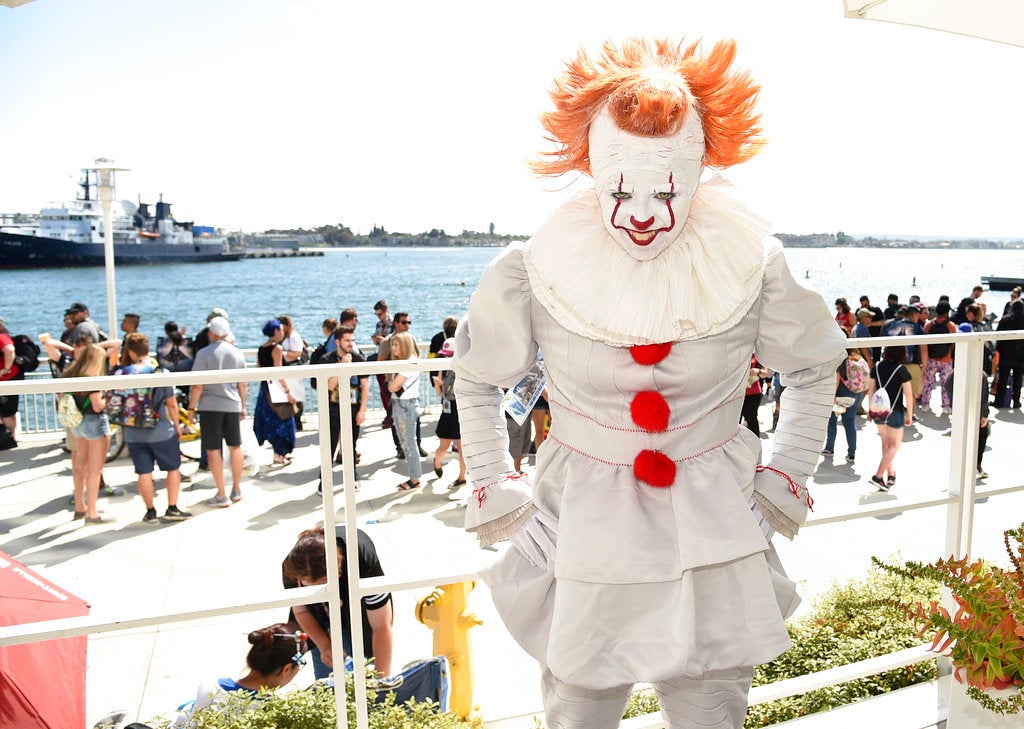 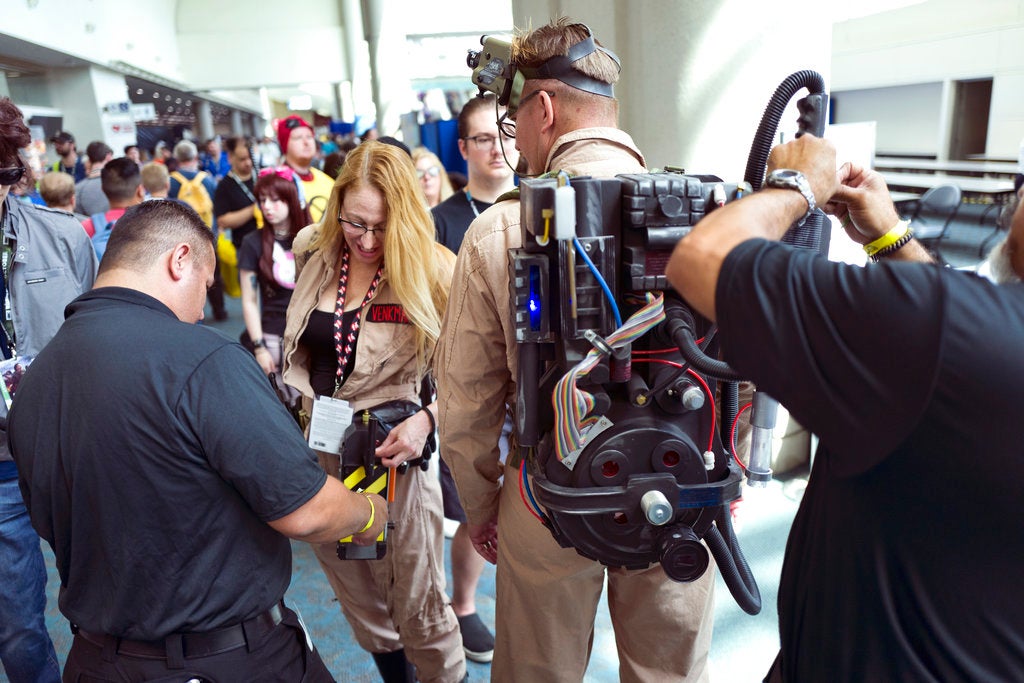 Attendees dressed as characters from the film, “Ghostbusters” have their costumes checked by security at the entrance to the San Diego Convention Center for 2018 Comic-Con International on Thursday, July 19, 2018, in San Diego. Image: AP Photo/Richard Vogel 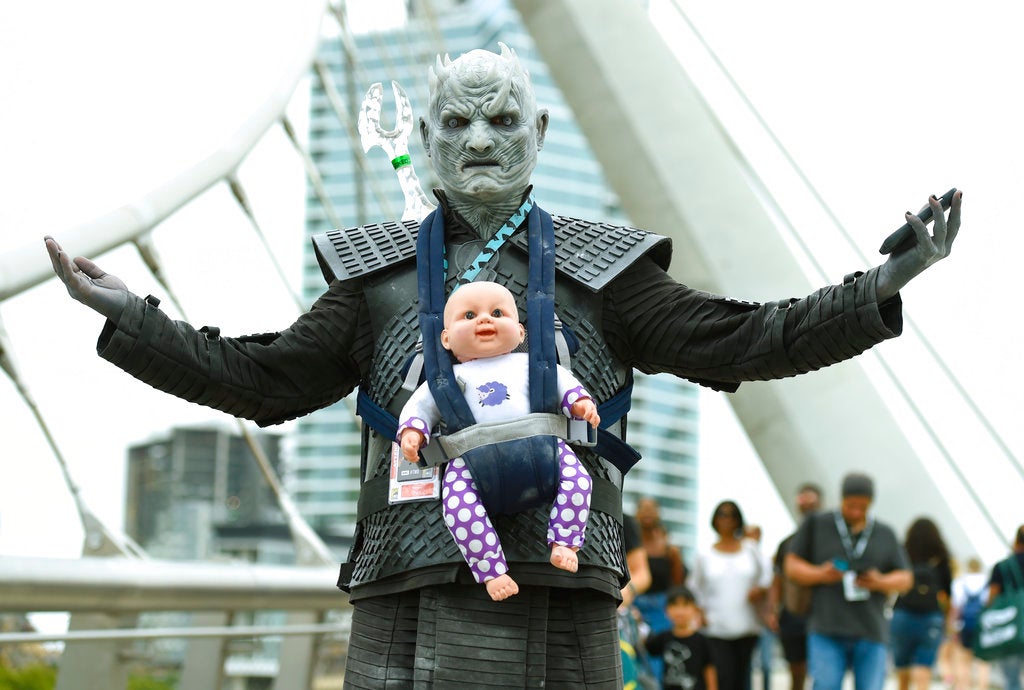 An estimated 130,000 people descend on the San Diego Convention Center for Comic-Con, which features panels on everything from comic books to Hollywood blockbusters.

The panels can lead to some tender moments, such as when Aaron Paul brought his infant daughter on stage during a “Breaking Bad” cast reunion. 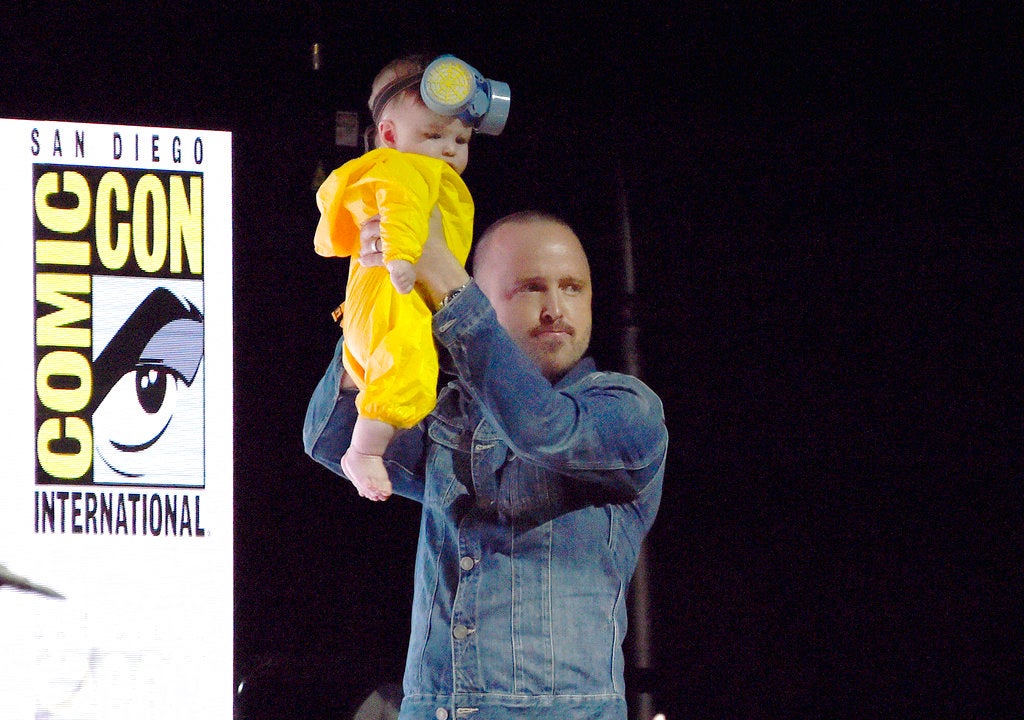 Aaron Paul holds his daughter Story Annabelle in the air as she is dressed as his character Jesse Pinkman at the “Breaking Bad” 10th Anniversary panel on day one of Comic-Con International on Thursday, July 19, 2018, in San Diego. Image:Richard Shotwell/Invision/AP

Even she was in costume — a yellow hazmat suit and respirator like the one Paul’s Jesse Pinkman character wore frequently on the AMC series. NVG

Comic-Con gets a look at gritty Spider-Man spinoff ‘Venom’