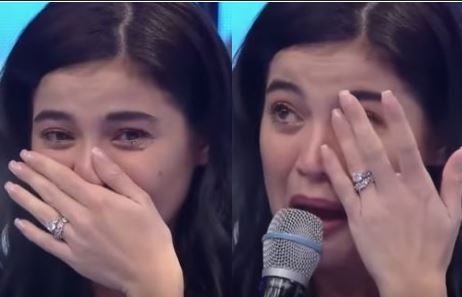 Anne Curtis recently committed a blooper on “It’s Showtime”—one that saw her turning her back from the audience in embarrassment and her co-hosts in stitches.

“It’s Showtime” hosts Vice Ganda, Ryan Bang, Amy Perez and Mariel Rodriguez, along with Curtis, were talking about the food in Pampanga during their “Tawag ng Tanghalan” segment onWednesday, Sept. 19. Ryan shared to his fellow hosts that the frog legs he tried in Pampanga were really good, to which Rodriguez agreed.

Anne Curtis joined in on the conversation to offer her take, telling Vice Ganda that there are clean frogs, such as the ones in the fields.

“Pero may malinis diba, yung mga palakang puki—bukid,” said Curtis. mispronouncing the word bukid for what sounded like the colloquial term for the female genital.

Curtis then turned her back on the camera in embarrassment as her co-hosts laughed out loud over her blunder.

Many viewers, too, found Curtis’ blooper on the show hilarious, with some taking to Twitter to express their amusement.

It didn’t take long for Curtis to notice the tweet as she shared it on the same day. Curtis poked fun at herself and wrote that she almost got in trouble for her blunder.

Did a minor curse while singing in ‘Your Face Sounds Familiar: Kids’?