Maritoni Fernandez pulled over for overspeeding in US, gets warning and photo op | Inquirer Entertainment

Maritoni Fernandez pulled over for overspeeding in US, gets warning and photo op 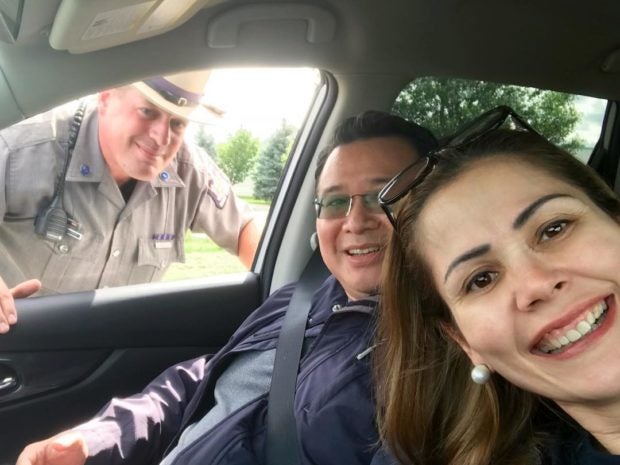 For the first time in her life, actress Maritoni Fernandez exceeded the speed limit while driving in the United States. Luckily for her, the police officer who was on her case let her off with a reprimand and warning — and a photo op.

Apparently, Fernandez was busy admiring the view at Interstate 90 (I-90), part of the New York State Thruway, while driving. She did not notice she was going past the 65 miles per hour (mph) speed limit. “Excitement much! Today I got pulled over for speeding on the I-90E freeway,” Fernandez said in a post she shared via Instagram on Friday, Sept. 7.

Despite going 88 miles per hour in a 65 miles per hour zone, the actress got off the hook. “Cop was so kind he let me go [with] a warning and a photo op! Thank you Sir!” she added, uploading the said photo of herself, her boyfriend Dan and the police officer.

“He was probably thinking… foreign drivers!” the 49-year-old actress remarked, highlighting the fact that it was her first time to get a speeding ticket. “Don’t know if I should be proud or embarrassed! My first ever speeding ticket at nearly 50 years old.”

“I know right! I told him it was my first speeding ticket ever, if he gave me one, and I wanted a photo to remember so he obliged and said he’d let me off this time,” Fernandez replied, explaining the circumstances surrounding her photo op with the police officer.

“I was more excited than anything I think,” she recalled. “I am nearly 50 after all! Another one to check off my bucket list (without meaning to)!” 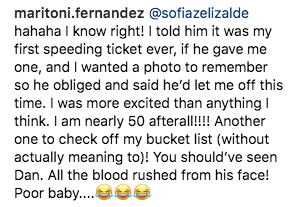 Despite having a blast during her stay in the U.S., Maritoni Fernandez did not forget to remember her sister, Aurora Moynihan, during her second death anniversary.

Moynihan, who was suspected of supplying party drugs to showbiz personalities, was found dead in 2016 in Quezon City with multiple gunshot wounds and a cardboard placard warning other drug suppliers catering to celebrities that “they will be next.”

“It will have been two years today since you left us Au,” she wrote last Monday, Sept. 10 on her Instagram. There isn’t a day that passes by that I don’t think of or wonder if there could’ve been anything else I could’ve done for you to prevent that fateful night.”

“I still don’t know. All I know is that you are with our Heavenly Father now and that it is a better place,” she stated. “I know there is justice even in silence for all who trust in the Lord. I miss you and will forever love you my baby sis. Til I see you again in heaven someday. RIP.” JB