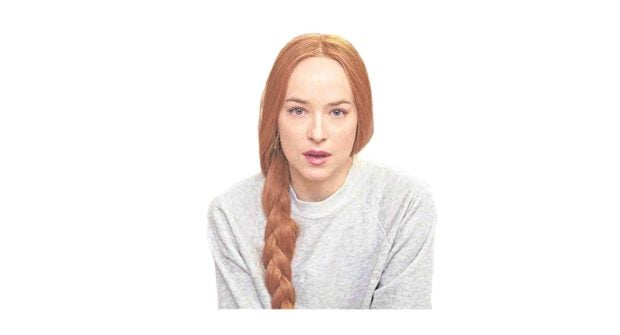 LOS ANGELES—“When was the last time you saw a film that made people feel a lot of different things?” Dakota Johnson asked aloud about “Suspiria,” her controversial new film with “Call Me by Your Name” director Luca Guadagnino.

Dakota stars as Susie Bannion, an American dancer who attends a prestigious dance academy in Berlin and realizes it’s a front for a coven of witches, in Guadagnino’s remake of the 1977 horror classic by Dario Argento. While “Suspiria” premiered to an eight-minute standing ovation in the Venice Film Festival, it has divided the critics.

Chicago Tribune’s Michael Phillips reported, “Fully 52 minutes longer than Argento’s, this ‘Suspiria’ found plenty of admirers on the Lido. It’s a genre departure for the man (Guadagnino) who made the sensual awakening tales, ‘Call Me by Your Name’ and ‘I Am Love.’ Yet the obsessive focus on atmosphere in ‘Suspiria’ connects to the director’s previous work, even if the movie becomes a tough slog. Walkouts were plentiful at the screening I attended, thanks to protracted scenes of mutilation and crazy, De Palma-level geysers of blood flooding the climactic dance ritual.”

Tilda Swinton, Mia Goth, Chloe Grace Moretz and Jessica Harper (who had the lead role in the original) costar in the film mainly shot in Varese, Italy.

Excerpts from our interview with Dakota:

Are you surprised by the controversial response and how vocal people have been? It’s a true work of art on Luca’s part. I am thrilled to be a part of it. Of course, it’s nice to be involved in a film where everybody leaves the theater happy, but then, do they go home and talk about it?

So, it’s a privilege to be involved in a film where people want to argue about what’s happening, because it’s really time for art to express the things that we need to express. People are ready for it. It’s an interesting moment, especially in cinema. And the fact that it’s a film with a cast of 40 women, but it is still controversial—perhaps we do need to focus on other things?

The whole concept of witches is almost evocative of female empowerment. What do you think?  The film speaks about some pretty substantial concepts which are the power of women—the number of women that exist in a singular woman. I think there are 40 women in the cast. In each of them, there are a million women. I find that in myself—and that’s OK.

For a long time, it’s been that women had to be stable, subdued, polite, sweet, charming and sexy—but not too sexy.

It’s like, why can’t I be everything? As long as you aren’t hurting anybody else. This film tackles a very dark subject matter because of the anger of the times and the political situation.

Talking about the different roles of women, can you talk about the mother figures in the movie—your character’s mother and another mother who comes into being? It can be interpreted in many different ways, and all of them are correct. There’s this idea of a matriarch who isn’t one thing. There have been relationships between spawn and mother that are convoluted, tricky, abusive or emotionally complicated.

The mother of Suspiria in this film is all encompassing—[she’s] every emotion, every woman. She is in touch with all of her energy, power, the universe. In a magical sense, she has this actual power over people, and the ability to keep you alive or kill you, and the ability to erase your memory, destroy your life or make it like heaven.

Susie has this magnet hold on Madame Blanc. There’s no reason for Susie, coming from her Mennonite family, to be obsessed with Madame Blanc. It’s the opposite of everything she has grown up in. She is meant to do this. She’s a powerful being, like a god. I think the film is basically saying that a mother is a God.

Can you talk about the mother-daughter relationship? We don’t see their relationship, but you can sense that it’s terrible. The mother hates Susie because she isn’t who the mother wants her to be, which is one thing. Then, Susie has a relationship with Madame Blanc, who loves her, because she’s exactly who she wants. In that way, Susie and Madame Blanc sort of adopt each other. To become the mother for Susie is to become the ultimate. I think a mother could be sort of genderless.

But you understand why people could be confused? By the movie? Yes.

The film is so layered. What do you think is at the core of this movie?

The core of the film is love. If you watch it again with that in mind, it might make a whole world of sense to you.

How hard was this movie to shoot? It was a pleasure to shoot, actually.

Talk about the challenge of dancing in the film. Ninety percent of the dancing was me.

Even the jumps? Yeah. The jumps were me. I danced as a child, from 5 to 15. I did ballet, jazz and tap. I have learned choreography before, which I think is a certain muscle of your brain. I trained for the dancing. The first six months were spent working with someone on my body. Then, a month prior to filming, I worked with Damien (Jalet, choreographer) and the other dancers in Varese every day, for six to eight hours.

I worked very closely with one dancer named Tanya, who had a similar shape to mine, so when there were things like a quadruple pirouette, which I cannot do, sadly, she would double me—and it was amazing. She was the greatest coach.

Has your body flexibility changed as a result? My body has changed since then. I haven’t been dancing since we finished filming. But I have a whole new appreciation for needing to move your body, which is what dancers  feel—you just have to move. It’s really liberating.

Your character says something striking—when she says that it always amazes her how willing people are to believe that the worst is behind us. It seems to really capture our times. Yeah. When we were filming, President (Donald) Trump was just elected to office. We went to set the next day. Tilda and I just cried. It was a truly bizarre moment, to be in a seemingly removed place, in an abandoned hotel on top of a mountain in the north of Italy, and all my family is at home.

It felt like, how was this even possible? How do I feel so alive and so dead at the same time? It was crazy. It’s important for films to be provocative. It’s art.

Trump has been talking like Tony Soprano. It’s f**king crazy, and it’s out of control. I’m disgusted.

What did you learn about yourself in doing this film? I learn so much about myself on every project, but I don’t know specifically. What I have really learned is this sense that a lot of women and young girls are living with this outdated feeling that they must compete with other women.

That isn’t a concept in our film. It’s not about skill. I learned that working with 40 women, from all age ranges, we were all so happy to be with each other all of the time. I’d like to perpetuate that and make films with female filmmakers.

I’ve learned that it’s really important to keep propelling that idea forward. And that parity is important. There should be no other difference.