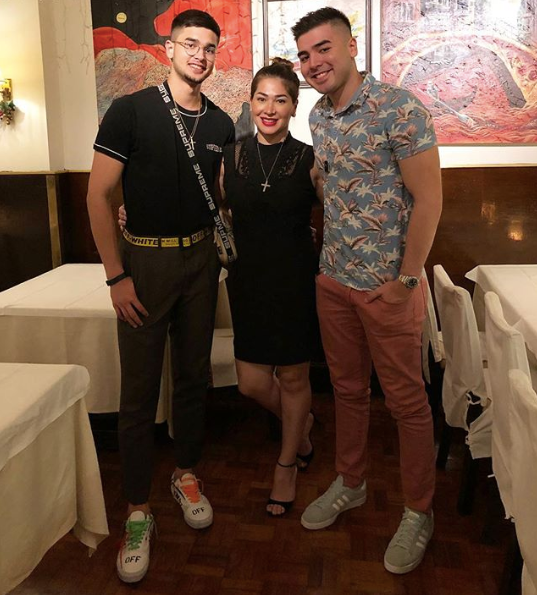 Jackie Forster put her foot down on speculations circulating on social media about her motives behind reuniting with her sons Andre and Kobe Paras.

Yesterday, Sept. 1, the mom of five answered on Instagram three kinds of assumptions on why she reached out to her sons which she said were being spread on social media. She listed these as follows: that she needs money, that she needs something from them and that she craves fame.

There are people saying things about me on social media like : I’m only trying to be in my sons lives because of money, I only contact them when I need something from them or I’m trying to use them to become famous?? 1) I don’t need money from anybody, never needed it from their father and I never asked them for money and never will. 2) yes! That’s true I only send out messages/reach out when I need something from them – that’s called needing – a relationship. That was and is a need, not just for me but for the boys as well. All children need to have relationships with both parents. It’s vital. 3) I’m using them to be famous??? Umm.. this is what confuses me the most because I’m sure many of you my age of a little older remember that I was somebody once upon a time too.. I had big dreams and a big career. I think, correct me if I’m wrong – before my two sons or their father came along many people knew who I was. I worked my ass off as a young actress and I paid my dues – I traveled through the Philippines back when there was no SMS or smart phones, no internet and no social media. I had movies, dozens of tv guesting and had to travel to the ends of our islands for shows to promote movies or products or when i was invited by the politicians. Please don’t diminish the little legacy I left behind to try to make others look good or to continue to make me look bad. The old chapter I had is behind me, Kobe chose to also turn the page. Andre chooses to stay in the past for reasons he can explain to everyone when he is ready. He is an adult and I am respecting his need for space or time. I’m all the way in London trying to live in peace and joy with my three younger children. Please stop spreading negativity about me. Just because I don’t post material things or show off it doesn’t mean I don’t have – I don’t want to have to post the brands I wear, where I shop, where we eat, what we eat!?? Just to prove myself to people who mean nothing to me. I am focusing on who wants and needs me in their life. I share travel pics and milestones/frustrations because I think it’s important for people to explore the world and To cherish daily achievements & help each other 💕

“I don’t need money from anybody, never needed it from their father [Benjie Paras] and I never asked them for money and never will,” she said of the first allegation.

As for the second, she admitted that she does need her sons, but not for the reason most people think. She said she needs a relationship with her children. “All children need to have relationships with both parents,” she explained.

She said the last statement was what confused her the most.

“I was somebody once upon a time too… I had big dreams and a big career,” she said. “I think, correct me if I’m wrong — before my two sons or their father came along many people knew who I was.”

She also recalled how she worked hard and thus earned popularity in the industry, sharing that it took much traveling around the country to make herself known and to promote her projects before the age of social media.

Forster also spoke for her sons, saying that while cager Kobe, 20, had moved on from the past with her, Andre “chooses to stay in the past for reasons he can explain to everyone when he is ready.”

“He is an adult and I am respecting his need for space or time,” she said.

But this didn’t seem to sit well with 22-year-old Andre, who urged his mom for privacy.

“I’m not explaining anything to anyone and I don’t owe an explanation to anyone. I’m not living in the past I’m just quiet po,” he wrote in a comment.

“This is just between us. Privacy is everything remember? If you have haters don’t mind them,” he told his mom.

However, he earned some backlash from a few fans and commenters, with some giving their own opinion on how he should’ve handled the issue. For instance, one @linbaj reasoned that his mom simply misses him and is proud to show them off through social media.

“If you want entertainment please watch ‘The Office’ U.S. version and let me know what you think about Creed,” he advised. 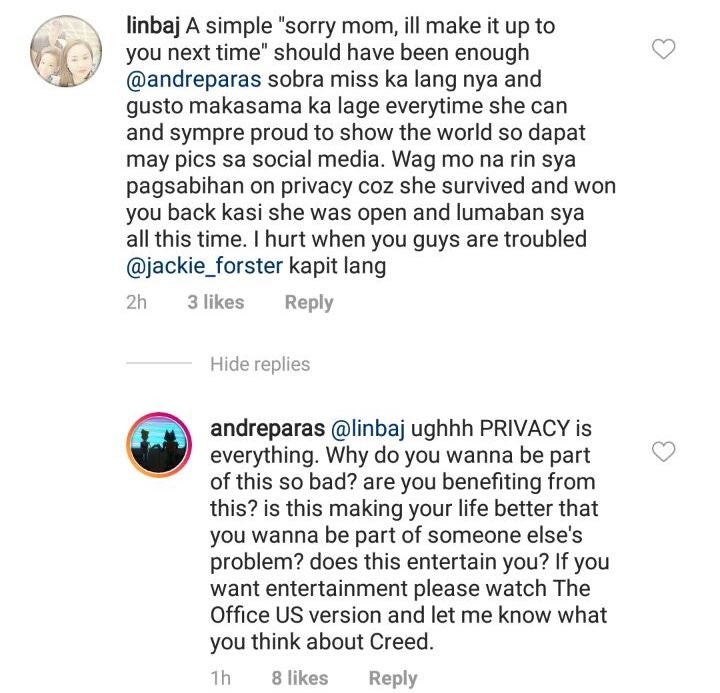 But eventually, it appears he became fed up with netizens’ comments. In a statement written in capital letters, he said, “I tried to explain. Pero (but) you guys still don’t seem to understand me. You’re trying to push what’s on your mind and trying so hard to make it seem you know what’s going on. It sucks ‘cause you guys are like in your 30s and you still don’t know how to listen. I already explained my side pero what? Wala pa rin (Still nothing)? Sad, super sad.”

He clarified in other comments that he is at peace with his mom and that he simply wants his privacy respected on the matter.

After Forster announced her reunion with her sons last April, Kobe became more visible in her social media posts and spent time with her when she visited the Philippines with her family last July. While Andre has been absent from pictures with her and her family, Forster said she knows he loves her.

Forster currently lives in London with her husband Michael Franken and her three younger children. JB

If her sons ask her to move back to PH, Jackie Forster says she would