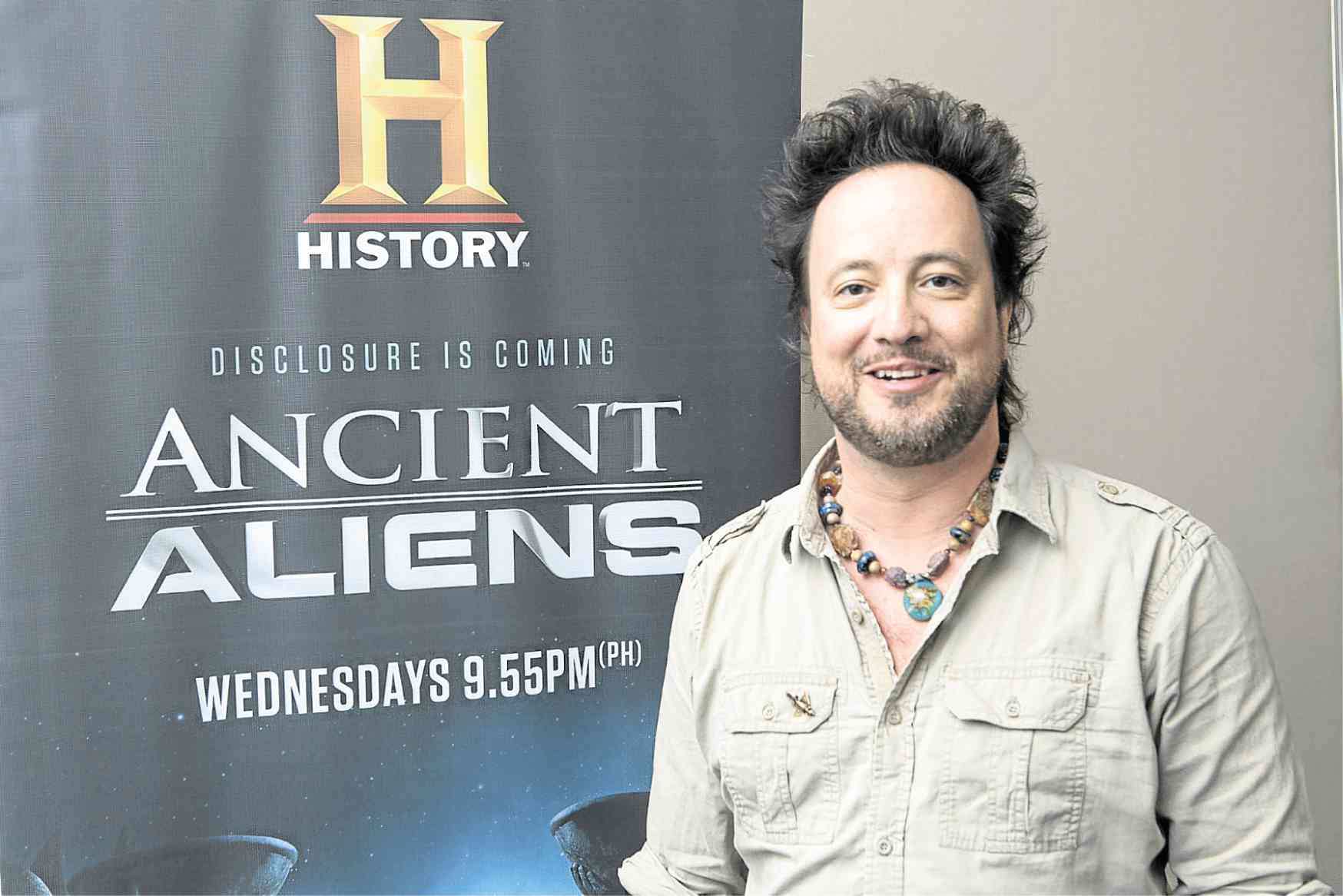 Since his last Manila visit two years ago, “Ancient Aliens” host Giorgio A. Tsoukalos has been pretty busy, racking up frequent-flyer miles and traveling to countries near and far.

For the 11th season of the History Channel program, Tsoukalos visited places as exotic as Sardinia and Egypt.

“I’m really excited about this season because we got the chance to travel worldwide to new locations that we have not ever seen before,” the renowned UFO expert told the Inquirer during the recent History Con. “On the island of Sardinia in Italy, we investigated the ancient mythological stories of giants. Incredible! I was there last April and it was truly extraordinary.”

Another highlight is the two-hour special on Egypt. “My good friend, Ramy Romany, an Egyptologist, and I spent about 10 days exploring archaeological sites.”

Cairo was definitely a memorable adventure for Tsoukalos. “I suggest to everyone to put Egypt on their bucket list. It will surely be a transformational experience because when you stand in front of those pyramids on the Giza plateau… you’ll be speechless for the first two minutes.”

Which is quite astounding for the usually loquacious Tsoukalos.

“All of a sudden, you are standing in front of an artificial mountain in the middle of the desert,” he enthused. “I grew up in Switzerland. I know what mountains are! They always say, ‘All the pyramids are big!’ But you have no idea how big they are until you stand in front of them. Look… I’m getting goose bumps just thinking about it. It’s tremendous! ”

Ever the diplomat, the globe-trotter is reluctant to play favorites among the various nations he has visited. “Each country has its own beauty… it’s hard for me to choose one single place. But since we’re in the Philippines, I would have to say… the Philippines!”

Given the chance to survey other regions in future episodes of “Ancient Aliens,” he’d pick the little-known island of Pohnpei in Micronesia, in the South Pacific.

“On top of my list is Nan Madol… nobody really knows how this site was built… gigantic structures made of black basalt,” he related. “Giant logs of long pieces of basalt, each weighing an excess of 50 metric tons! Thousands of them stacked, creating walls and structures.”

According to Tsoukalos, the islanders claimed that humans were not responsible for the archaeological wonder. “They would say: ‘This was done by the spirits.’ In my opinion, those spirits were not ghosts but were flesh and blood… extraterrestrials!”

But the ultimate dream destination for Tsoukalos would be in outer space, of course. Will he grab the chance to go on a space mission?

“Absolutely! In fact, I would do it without a return ticket,” he quipped.

He recounted that in the 1990s, the idea of traveling to Mars was developed but later scrapped because the fuel for the round trip would be too heavy for a spaceship to carry. “But a rocket scientist named Robert Zubrin pointed out that we only needed to carry fuel to go to Mars. Once we got there, we could create the fuel we needed to get back to Earth.”

Nasa, however, nixed the proposal because if we failed, “then we would have five dead astronauts on Mars.”

A Martian holiday may not be a flight of fancy in the foreseeable future, though. “My childhood friend, Andreas Zill, is now a rocket engineer, and he told me that there is a 99-percent certainty that we can retire on Mars, 20 to 30 years from now. I would do that! Sign me up,” he asserted.

But are people ready to venture into the Great Unknown and have a close encounter of the third kind?

“I think so! Look, it can happen in the next five minutes… aliens could just show up… or it could happen in the next 50 years,” he remarked. “Personally, I believe that we will make official contact within our lifetime. And I think shows like ‘Ancient Aliens’ are preparing the planet for this certainty.”

Loyal viewers of “Ancient Aliens” will surely be ready for that inevitability, but what about the uninitiated?

“I encourage everyone to tune in because even if you’re not interested in the topic, you will still learn something… it combines an adventurous quest with history,” he noted. “And it’s beautifully shot! So it’s a great hour of entertainment, and you may learn a thing or two.”