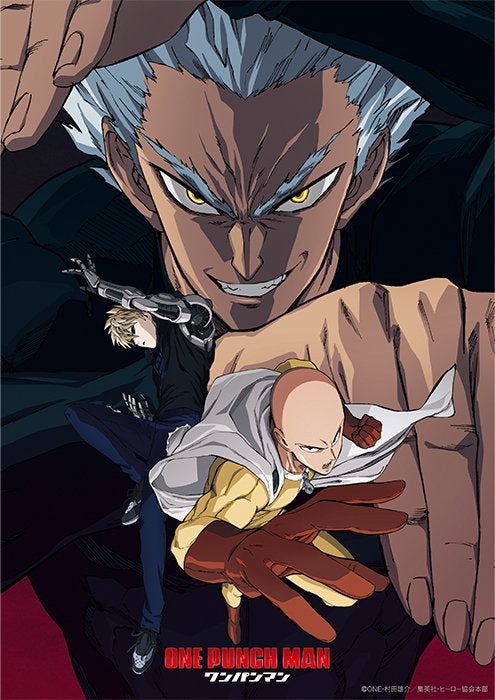 “One Punch Man” will be coming back for a second season in April 2019.

J.C. Staff, the production studio that took over from Madhouse, made the announcement at the Wanpanman Maji Gakuen Festival held at Omiya Sonic City in Saitama, Japan, on Aug. 12.

Tweets from the anime’s official Twitter account and the show’s English distributor Viz Media echoed the announcement. The tweets also included a new poster and teaser for “One-Punch Man” season 2.

The new season will feature a new sinister enemy for Saitama in the form of Garou. He is pictured in the season 2 poster as the man with silver hair. 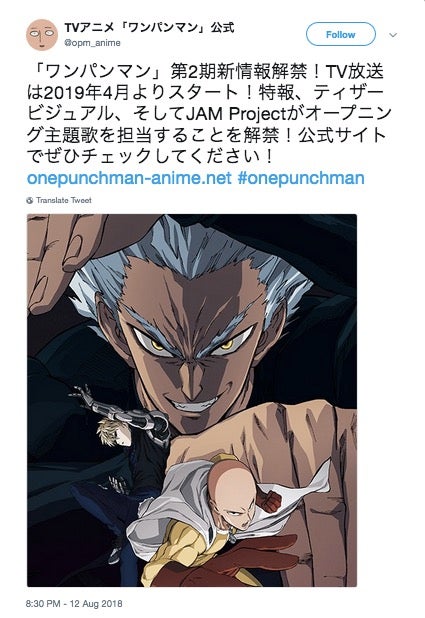 Prior to the event, reports circulated that the show’s second season would premiere in 2020, two years after a supposed pilot episode on Aug. 12, which turned out to be the festival’s date. Said information originated from an Aug. 9 tweet by Twitter user YonkouProductions (@YonkouProd), a known source for industry insider news and leaks. 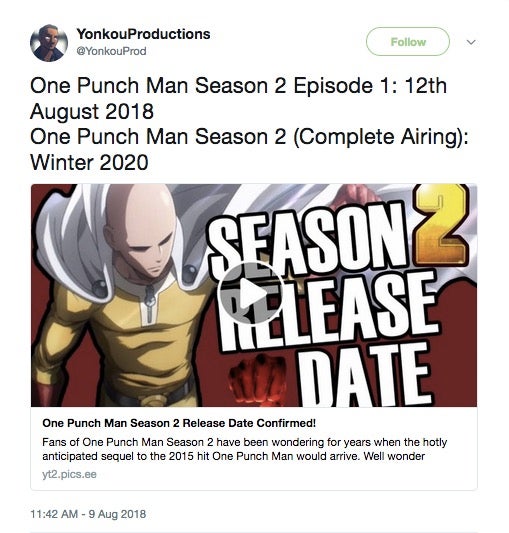 Fans who caught wind of the reports were understandably surprised considering the first season of “One-Punch Man” premiered in Japanese television in 2015. A five-year gap between seasons appeared to have stretched out fans’ patience.

Fortunately J.C. Staff put the fans at ease with its announcement. Furthermore, JAM Project will once again sing the opening song for season 2. Fans can expect an adrenaline-pumping intro song in the same level as the first season’s “The Hero!! Set Fire to the Furious Fist.”

“One-Punch Man” began as a self-published webcomic in 2009 by manga artist ONE. He also created the popular supernatural series “Mob Psycho 100.” The webcomic would later be adopted into a manga with more polished artwork, and begin serialization on Young Jump Web Comics on June 14, 2012. There are currently 17 compiled volumes of the manga.

“One-Punch Man” follows the superhero Saitama, who became the strongest hero around through sheer hard work. 100 push-ups, 100 sit-ups, 100 squats and 10-kilometer runs every day turned average Joe Saitama into the powerhouse he is today. Unfortunately, he’s become so powerful that every fight ends with a single punch, which leaves him bored and unfulfilled.  /ra