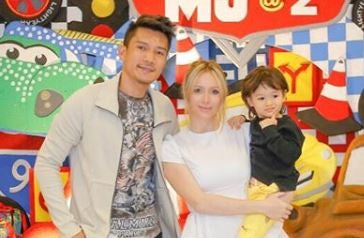 James Yap and Michel Cazzola marked the second birthday of their son MJ with a Cars-themed affair. The young tot turned 2 last Aug. 8, but his celebration wasn’t until a few days later at ActiveFun, an indoor playground in Bonifacio Global City, Taguig.

Yap and Cazzola were the proud parents, taking to their Instagram accounts last Aug. 12 to share photos from the fun event.

“So much fun at my boy’s birthday celebration!” Cazzola wrote on her Instagram as she shared a series of pictures of her, Yap and baby MJ at the party.

In one picture, Cazzola carried the dashing MJ in her arms, while Yap stood on her other side, the three of them smiling for the picture with the Cars-themed backdrop behind them.

Yap, too, shared pictures from MJ’s celebration on his own Instagram account, wishing his son—who he endearingly calls Bugoy—a happy birthday.

“Happy 2nd birthday to my Bugoy!” wrote Yap, also extending his gratitude to all those who came. “Thanks to all our friends who celebrated with us!!!”

The party was more low-key than MJ’s 1st birthday party last year, which was a grand jungle-themed bash held at the Blue Leaf Filipinas in Parañaque city.

Yap’s son with ex-wife Kris Aquino, Bimby, was notably absent at MJ’s 1st birthday and this year, he apparently again missed MJ’s birthday party. It’s known that Yap expressed his sadness over Bimby’s absence last year, saying it “would have been nice” if MJ and Bimby had the chance to have their picture taken together.

Back in April, Aquino took to social media to blast Yap over his birthday message to Bimby. Aquino then criticized Yap for making an “excuse” not to pay half of Bimby’s school tuition. She also told him that he and Bimby no longer saw each other because he no longer had any “benefit” from her son.

Aquino, however, had a fresh message for her ex-husband last July on what would have been their 13th anniversary. In her post then, Aquino wished Yap and his growing family peace and lasting happiness.  /ra