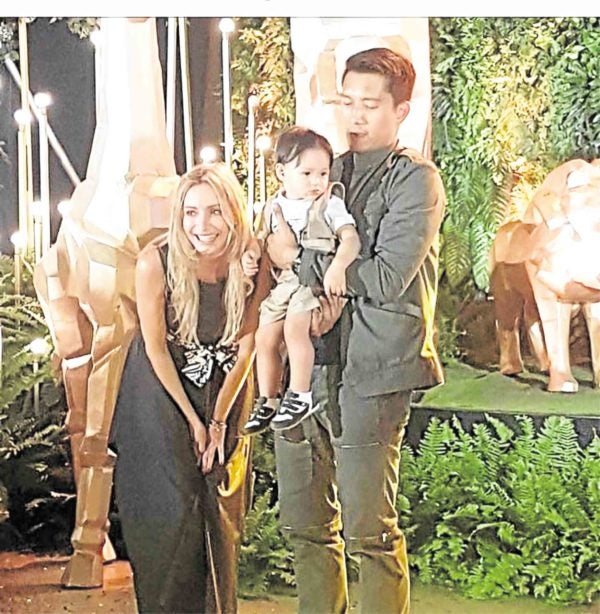 I immensely enjoyed the jungle-themed birthday bash of MJ Yap, the baby boy of my good friends James Yap and Mic Cazzola, at Blue Leaf Filipinas. Event organizer La Belle Fête and stylist Daniel Sandoval captured the “rain forest” vibe so well. From the moment we entered the venue, we felt like we were lost in the woods with the kiddie guests romping around in animal costumes.

Considering how grandiose the first birthday party of MJ was, I teased James, “What more when MJ gets married?” I also chided him about how many months’ worth of salary he spent for the party. James shot back, “Madami-daming pawis sa court ang nilaan ko para dito (I worked hard on the court for this party).”

James said he felt sad about Bimby’s absence at MJ’s party. He has not seen his son with ex-wife Kris Aquino for eight months now. He revealed that the last time he saw the child was last New Year.

James said it would have been nice if his two sons had the opportunity to have their picture taken together at the party, though he understood Bimby’s decision “to meet up with MJ separately.”

Meanwhile, I teased Mic that since she’s back to being sexy, she might get pregnant again. The hot mama exclaimed, “No, please. Not yet (laughs).”

I also kidded Clarisse, the fab wife of Chris Tiu (teammate of James), that since MJ and her daughter Amanda are playmates, they ought to end up together in the future.

Most of the guests insisted that MJ looks more like Mic than James. Be that as it may, MJ will always be the best part of their love story. Viva la familia Filitaliana!

Here’s my chat with Mic:

How would you describe your friendship with Kris at this point? Mutual respect. I look up to hardworking people with strong work ethic, and mothers who are raising their children on their own. I admire Kris’ strength.

Our situation isn’t simple, so we do our best to act positively, as good examples for our sons.

Any advice for women on how to move on and be friends with the ex of their partners? That isn’t easy. It takes maturity to do that. Actually, if there are no kids involved, there’s really no reason [for us] to be friends or to be cordially talking to each other… I don’t see the point. But, when there are children involved, you do it for the kids, if ever they want to establish a relationship in the future. You need to show that you’re mature enough to do it for them. It’s also important to teach them respect.

In what Italian and Filipino ways are you raising MJ? Italians are more direct than Filipinos, generally speaking. Filipinos have a softer way of speaking. I will teach MJ the importance of being direct, to speak his mind, in a gentle way.

When MJ grows up, how do you intend to discipline him? James and I have a strong work ethic, in two very different fields. I’d like to teach him the importance of working hard in order to be independent.

When MJ comes of age, would you allow him to join show biz? If that’s what he wants, I will support him.

What are your and James’ dreams for MJ? For him to excel in whatever he’ll do.

Any wedding plans yet? None as of now.

What’s the best and the toughest part about motherhood? There are so many “best” parts. I love taking him with me wherever I go. The tough part is when I need to leave MJ at home, because of the demands of my job.

What’s your advice to mothers on how to become a hot mama like you? I’ve always valued the importance of taking care of myself—physically and mentally. Working out helps both mind and body.

How do you balance being a partner to James, a mother to MJ and being a career woman? I delegate. I am “OC” in the house. I used to clean everything myself, but I’ve learned to let others help me with that, so I have more time for other things. At work, I love my job, so I don’t feel it as a burden. James works, too, so we meet after work. When we don’t work, we stay with our son. But, we also have date nights as a couple.