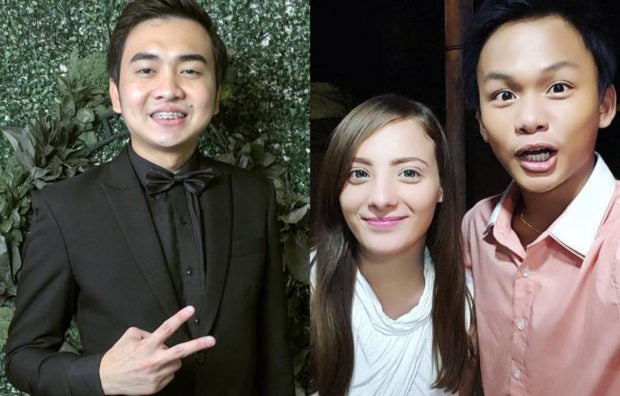 Xian Gaza landed himself in hot water once again after sending a photo of himself in a supposed attempt to flirt with actor Buboy Villar’s partner, Angillyn Serrano Gorens. Villar’s American partner shut down Gaza’s advances by sending him a photo of Villar raising his ring finger.

“Hingin ko sana opinyon mo if okay lang yung cap ko at kung bagay ba sa shirt ko [laughs] (I’d like to ask for your opinion if may cap is okay and if it matches my shirt),” Gaza initially asked Villar’s partner. She replied, “San? (Where?) Go.”

Gaza then sent a selfie. However, it can be seen from the photo that he added a smiling face with open mouth and cold sweat emoji sticker on his crotch area. “Ano okay lang ba? Bagay ba? (How was it? Does it match?)” he asked.

Just when Gaza thought Villar’s wife lost interest, she answered back stating, “Ako meron din ako sesend sayo. Gusto mo? Wait (I also have something to send you. You like? Wait).” Not long after, Gorens sent him a photo of Villar with his fourth finger raised up, as if giving Gaza the middle finger.

Gaza apologized to Villar in one of his comments. He also noted that after talking to Gorens, he learned not to flirt with someone who already has a spouse. 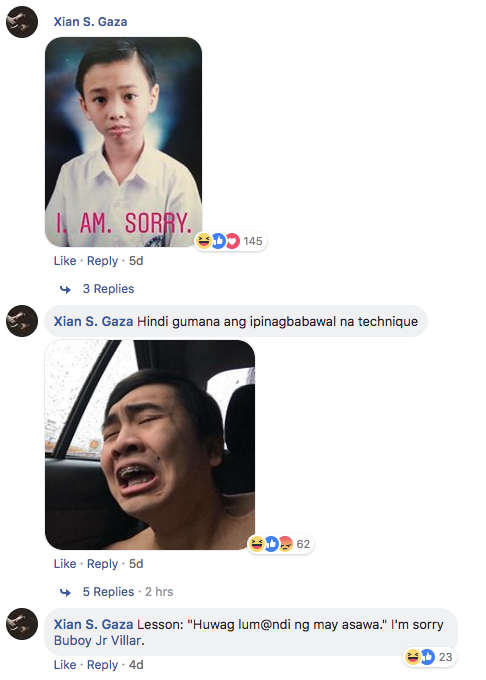 Netizens were quick to react on his post. Gaza’s fans found his hokage moves funny.

However, some did not find amusement on his flirting attempt and called him out for wanting to be famous even when looking stupid.

Some netizens warned him about the dangers of being disrespectful, saying his flirty moves might get him physically harmed or may even cause his death.

Gaza became popular after he publicly asked actress Erich Gonzales for a coffee date using a billboard in Morayta, Manila in 2017. Recently, he was sentenced to a five-year, six-month imprisonment after being found guilty of violating the Bouncing Check Law.

He asked Gonzales out once more on June 30, almost a year after his billboard stunt.

Erich Gonzales,A year ago July 1, 2017… I put up the ‘Coffee Date with Erich Billboard’ in Morayta, asking you to…

“If the Lord Almighty will go down from heaven and grant me one birthday wish bago ako makulong, ang wish ko eh matuloy na yung coffee date natin kahit sa huling pagkakataon (before I get jailed, my wish is for our coffee date to push through for the last time),” wrote Gaza. “Na yung bagay kung saan nagsimula ang lahat at kung saan ako nakilala eh maisakatuparan man lang (That the [wish] which started everything and which made me popular may come to fruition) before I serve my 5-year sentence.”

Gonzales has yet to reply or issue an official statement on Gaza’s renewed request, as of this writing. JB

Xian Gaza on Kris Aquino: ‘Typical Filipina who still can’t get over her ex’