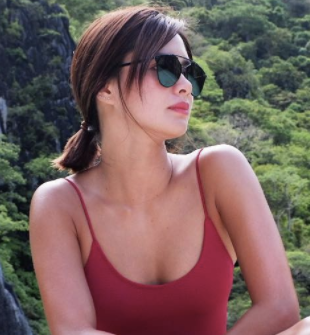 Erich Gonzales has finally made up her mind and turned down the extravagant coffee date invite made by self-proclaimed millionaire CEO, Xian Gaza.

In an interview with ABS-CBN last Sunday, the actress said she came up with the decision after studying all angles of the unusual date proposal.

“To be honest, regarding that issue, noong una (at first), just like you guys, na-surprise ako (I was surprised). Natuwa naman ako sa effort (I was delighted at the effort). As things unfolded, lumabas ‘yung mga expose about him (the exposes about him started coming out), ako naman kasi personally, lahat naman ng supporters ko naa-appreciate ko lahat ng ginagawa nila, malaking bagay o maliit man ‘yan (As for me, personally, I appreciate all my supporters and what they do for me, whether big or small),” she said.

Her decision was also guided by her family and friends’ opinions.

“Parang naging (I felt) uncomfortable ako. After talking to my family and my closest friends, I decided not to meet him na lang,” the actress explained.

It was not too long ago when her controversial break-up with former boyfriend Brazilian actor-model Daniel Matsunaga made headlines because of alleged money concerns. Hence, she intends to simply enjoy life for now, without the pressures of being in any romantic relationship.

Meanwhile, news of Gonzales’ decline already reached Gaza. After learning about it, he made his reaction public through a Facebook post.

To further emphasize the death of his ultimate dream, he wrote a date for his cremation, his 40 days observance, and his first year of death anniversary.

His efforts at inviting Gonzales for a coffee date initially captured some sympathetic attention, until it turned into some form of social suicide for the young father of one. Taking from his Instagram account, Gaza is currently enjoying a vacation in Israel.

With Gonzales’ decline, he not only deals with a broken heart, but also with a wasted grand expense. According to an out-of-home advertising firm, a billboard ad along EDSA would normally cost anywhere around Php 250 thousand to Php 300 thousand. Gaza’s chosen location in Morayta, Manila costs roughly Php 150 thousand to Php 180 thousand pesos, excluding the actual printing cost of the billboard.

For a businessman, it turns out that he was at a losing end of this investment. JB