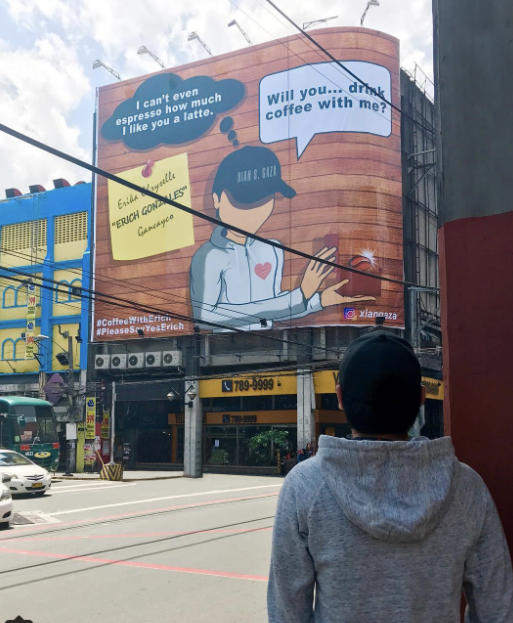 It started with a bit of word play: “I can’t even espresso how much I like you a latte.”

Then came the plea: “Will you… drink coffee with me?”

Very recently, a young businessman named Xian Gaza sent the Instagram community buzzing with his jaw-dropping coffee invite to actress Erich Gonzales. Jaw-dropping because it was done quite extravagantly, via billboard at the corner of Recto Avenue and Morayta, in the city of Manila.

“They say it’s first time in Philippine history. I say: That’s how special you are to me. @erichgg , will you drink coffee with me?” he said in a recent Instagram post showing a photo of the coffee invite billboard.

His post showed a man in a hoodie and cap, looking up at the billboard towering over the busy streets, his back turned—as if the man was hopelessly waiting for something. Meanwhile, the guy depicted on the billboard is faceless.

In another post, @xiangaza shared a similar post in video version, showing cars moving and people crossing the streets. Both his posts carried the hashtags #PleaseSayYesErich and #CoffeeWithErich.

To everyone’s surprise, the flashy gesture turns out to have resulted from a previous encounter of Gaza and Gonzales, Gaza revealed in an open letter to the actress via Instagram.

He started off by apologizing to the actress for posting his message publicly. He said he sought for ways to course his message in private but he could not seem to get through. He wrote that his gesture is done with an “ardent hope that this shall reach you at the soonest possible time.”

He then went on to recount an incident when he was nursing a broken heart and stated his plans of traveling to help himself recover, among others. Then, he chanced upon the actress with friends in a movie theater. In the letter, he reminded the actress of this encounter and how she was generous enough to grant him a selfie.

The young bachelor then proceeded to stating that the actress since then has never left his mind, and that he has flown “to numerous locations, taking that ‘Uptown Mall Cinema Moment’ with [him].”

He hopes to meet her again just as he sincerely thanked her for making him happy: “I really hope to meet you soon, Ms. Gancayco. And above all else, thank you very much for unknowingly making me smile and inspiring me in each passing day for the last half year. –Xian S. Gaza”

While some fans were impressed by the young businessman’s gesture and desire to personally know the actress, some were also bothered by it, calling the move obsessive.

Taking from his Instagram profile description, Gaza is the CEO of Guanxiqian Group. The young businessman has also admitted that he already has a child.

Gonzales has not yet commented publicly to Gaza’s posts on Instagram. Inquirer.net has also sought comments from Gonzales, but the actress is yet to reply as of this writing. JB

Erich Gonzales to accusing netizen: Never had a nose job