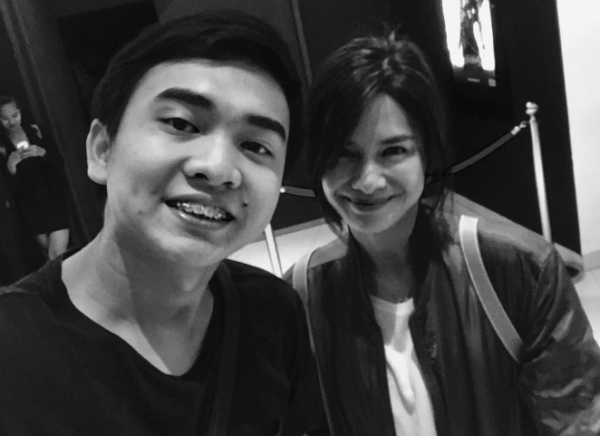 Young CEO Xian Gaza buzzed up the online community with his surprising gesture of inviting Kapamilya actress Erich Gonzales for a coffee date using a billboard, set up in one of the busiest intersections of Manila.

His extravagant act instantly drew mixed reactions. Some were swept away while others were skeptic and critical. Nevertheless, he is firm about one thing: that his gesture is sincere and he is not using the actress for any “business opportunity-presentation over-coffee-invitation.”

He also clarified that he “is not affiliated [with] any company besides Guanxiqian Group nor a member of any network marketing companies to date.” He made the public clarification after receiving feedback that his coffee date invite may just be a business marketing strategy.

To further prove his sincerity, the businessman posted a copy of his conversation with his “partner” supposedly related to the installation of the billboard.

Before the billboard was put up, he was asked by his partner if he was ready to be under “national news” and be the eye of “national keyboard warrior bashers and haters.”

With conviction, he decided to go for it: “If they will publicly crucify me for this, at least na-express ko ang The Seven Last Words—Will. You. Drink. Coffee. With. Me. Erich.”

He also prides himself with the idea that the actress became the first one in Philippine history to receive such a proposal via billboard. 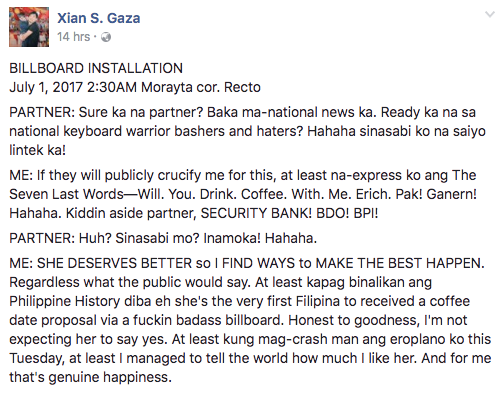 Gaza admits being a “former scammer”

Further scanning his Facebook profile, it seems that Gaza has quite a story to tell about his life before his business grew. While he denies any affiliation with any company aside from his own, let alone any connection with any network marketing entity, he admitted through a Facebook post that he was a “former scammer.”

In a post dated June 20, Gaza confidently shared his life’s struggles before he was able to establish himself in the business field. With his mounting financial obligations, he tried different opportunities to earn until he came across a “Malaysian pyramiding scam syndicate” and eventually became a part of it. Nonetheless, he takes pride in everything he went through and believes he would not be the person he is today if not for all the things he went through. 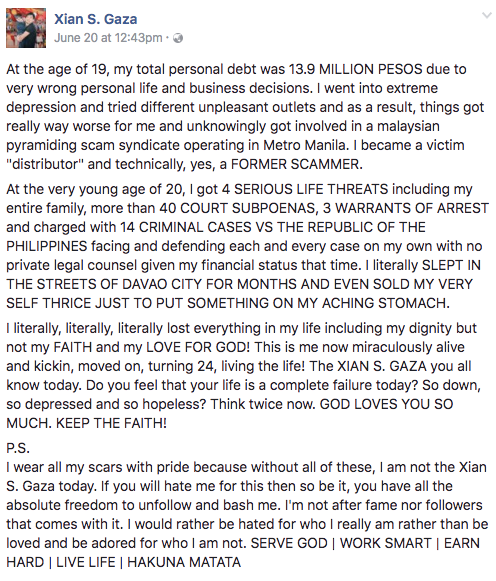 In a later post last June 25, he said he was “branded” as “scammer” by a particular business entity. He explained that this may have happened due to some people’s wrong impression about his character and way of doing business. He also stated that he once experienced huge financial struggles, but has found a way to bounce back by changing his perspective about money. 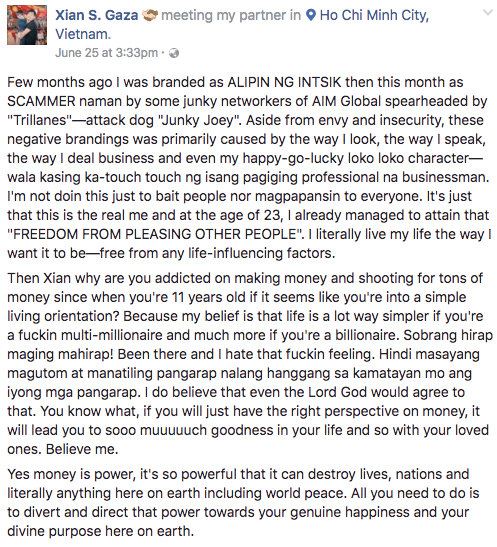 After shaking up the online world with his act, people are now more interested in his life and how he became the young CEO that he is. Noticeably, he has his social media handles on public mode, hence the influx of fans, eavesdroppers and bashers altogether, all interested in knowing where his pursuit of Gonzales will lead to. JB