Martin Nievera on Duterte: Best singing president of all presidents 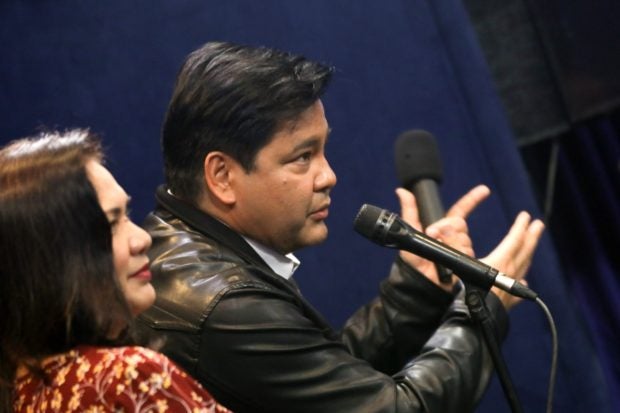 President Rodrigo Duterte may be disliked for his crass language, but “Concert King” Martin Nievera believes he is the “best singing president of all the presidents.”

Nievera made the remarks when he joined the Palace briefing on Thursday.

The ABS-CBN talent was in Malacañang to interview Presidential Spokesperson Harry Roque for his new show.

Duterte is known to grab the microphone and sing his favorite song during public events and even state functions.

During the gala dinner for the 2017 Association of South East Asian Nations (Asean) in Manila, the President gave in to the request of United States President Donald Trump and belted out “Ikaw” with singer Pilita Corales.

The President also usually sings “Ikaw” and “You Raise Me Up” in his meeting with the Filipino community during his trips abroad.

Duterte even sang “Ikaw” during a visit to the hometown city of his predecessor Former President Benigno “Noynoy” Aquino III.

But Duterte is not the only Philippine president who loves to sing.

Aquino, with fellow Liberal Party officials and then presidential candidate Mar Roxas, also sung to 1960s, 70s and 80s bops, starting with Bee Gees’ hit “To Love Somebody,” during an LP thanksgiving event in 2016.

Former president and now Pampanga Rep. Gloria Macapagal-Arroyo, meanwhile, is remembered to have sung the Carpenters’ song “I Have You” during Valentine’s day in 2008 with Claire de la Fuente who is dubbed as the “Karen Carpenter of the Philippines.” Kristine Macasiray / INQUIRER.net intern / jpv