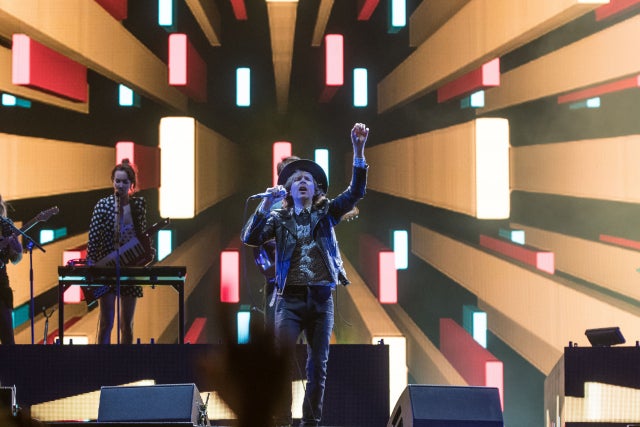 As Beck has solidified his role as one of music’s most influential figures, listeners have accepted a bargain — on record, or live, they never know exactly what they’re going to get.

Playing Thursday night to thousands at Quebec City’s summer festival on the sweeping Plains of Abraham battle site, Beck quickly made clear that his classic, wacky side was in the house.

Backed by a seven-member band, Beck ripped into his catalog with crescendoing force, the powerful, quick-shifting drums of Chris Coleman driving the way and bluesy keys and bass building a marathon extended version of “Where It’s At.”

“Odelay” cemented Beck as one of the progenitors of alternative rock, with his suave fusion of funky rhythms, grungy guitars and hip-hop delivery, coupled with surrealist lyricism that references street life in his native Los Angeles and science fiction, providing inspiration to two decades of artists.

But Beck has also defied predictability. In 2015, he was the surprise winner of the Grammy for Album of the Year with “Morning Phase,” one of two works on which Beck strips back the layers for mournful, acoustic reflections.

As if heeding a music industry narrative, Beck last year followed up the Grammy with his most mainstream pop album to date, “Colors.”

Beck, who on his breakthrough hit “Loser” spoke of shaving with mace in the dark and maggots on his sleeve, instead is singing, “All the colors, see the colors, make the colors, feel the colors.”

Yet “Colors” was no knee-jerk album, with Beck postponing its release for a year as he fine-tuned an elaborate production, and Beck seamlessly brought the songs, with their boisterous beats, into his live show.

Clad as a hipster cowboy in a black-and-white checkered shirt and boots before switching to a pink coat, Beck voiced amazement at the size of the crowd assembled before one of North America’s largest stages, set on the site where British forces routed the French from Canada in 1759.

Beck took care when segueing to the more intimate sounds of “Morning Phase,” bringing his band to the front as if in a group serenade.

Yet alone with his guitar, Beck also offered a free-wheeling version of “Debra”—in which his Hyundai, heading to a suburban shopping mall, becomes a spaceship—and, as has become his wont, an acoustic, falsetto-driven cover of Prince’s pop classic “Raspberry Beret.”

The Purple One also made a less expected appearance as the hard funk rhythms of his song “Controversy” introduced to the stage Phoenix—a band whose infectious electro-pop in fact steers clear of controversy.

In an unusual opening slot for a group that has headlined top US festival Coachella, the French rockers cranked up the bass to painful levels before a joyous set led by tunes from their latest album, the Italian holiday-themed “Ti Amo.”

Frontman Thomas Mars, slipping the cherry-red microphone into his pocket, gave his body to the crowd as he surfed 50 meters, fans propping him up while trying to snap photos on their phones.

The summer festival, known in French as the Festival d’ete de Quebec, follows an unusual public model with low-price passes for a full 11 days of music, the sheer volume of selling some 100,000 tickets helping recoup costs.