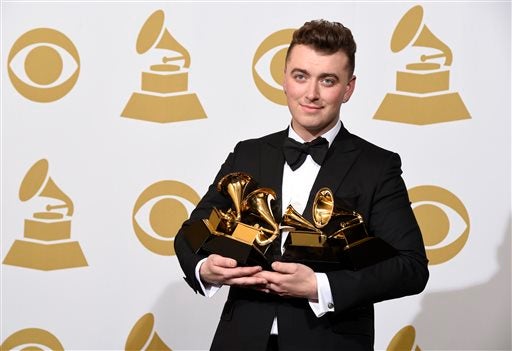 LOS ANGELES — Sam Smith, the British soul singer who was virtually unknown a year ago, dominated the Grammys Sunday with four awards, although adventurous rocker Beck was the surprise winner of Album of the Year honors.

The 22-year-old Smith took home three of the night’s most prestigious trophies — Record of the Year, Song of the Year and Best New Artist — as well as Best Pop Vocal Album.

Smith, who until recently was working as a bartender in London, on stage thanked the man he fell in love with last year and who inspired “Stay With Me” — his mega-hit ballad about a one-night stand.

“Thank you so much for breaking my heart because you got me four Grammys,” Smith said to applause.

Smith has refrained from on-stage theatrics and has walked a fine line on his personal life, acknowledging his sexual orientation while striving not to be identified exclusively as a gay artist.

He earned an ovation at the Staples Center in Los Angeles when he performed his signature tune in his rich, soulful tenor voice with Mary J. Blige.

“Before I made this record, I was doing everything to try to get my music heard. I tried to lose weight and … I was making awful music,” said Smith.

“It was only until I started to be myself that the music started to flow and people started to listen. So, thank you, guys, for accepting me to be just me.”

Smith was prevented from a clean sweep of the top categories by Beck, whose introspective “Morning Phase” — full of lush orchestration around his acoustic guitar — won the Album of the Year prize.

Beck, who also won Best Rock Album, has for two decades been known for his inventive and often ironic style which has won him critical acclaim and a cult following, if not the mainstream success usually recognized by the Grammys.

Beck’s award was presented by the often-elusive Prince who, sporting a futuristic orange suit and carrying a staff, pointedly spoke out against a series of killings of African Americans that has galvanized public opinion.

The theme was echoed throughout the Grammys. The rapper Common referred to the tensions with police in Ferguson, Missouri, as he joined John Legend on the song “Glory,” which is featured in the new historical film “Selma.”

And Williams turned “Happy” — what had been a straightforward ode to joy — into a more political track.

With his back-up dancers wearing hoodies, Williams led them in a “Hands Up, Don’t Shoot” gesture — a subtle protest against police shootings of African Americans.

Williams also took the funky pop song in a new direction, with dark classical strings and a piano interlude by Lang Lang — as well as stylistic references to the irony-rich film “The Grand Budapest Hotel.”

US President Barack Obama also appeared unexpectedly on an overhead screen to urge action to stop violence against women.

Saying that more than one in four women has experienced abuse, Obama declared: “It’s not okay. It has to stop.”

Survivor-turned-activist Brooke Axtell told the audience how she let a seemingly “handsome, charismatic man” abuse her, before Katy Perry sang an unadorned rendition of “By The Grace of God.”

Madonna — who was furious last month when songs from her upcoming album leaked – performed her new song “Living for Love” on a Valentine’s Day-red themed stage with ram-horned dancers.

Another feat for Beyonce

Beyonce won for Best R&amp;B Song and Best R&amp;B Performance with “Drunk In Love,” her tale of marital bliss sung with her husband Jay-Z, as well as for the more technical Best Surround Sound Album.

With the latest honor, Beyonce has won 20 Grammys — topping Aretha Franklin for the woman with the second biggest all-time haul, although still well behind the country star Alison Krauss at 27.

“This has been such an incredible year. I love you all. I’d like to thank my beloved husband. I love you deep,” she said.

The 33-year-old singer offered some of her most personal work on her latest, self-titled album, which she recorded in secret and released with no previous publicity in December 2013.

Eminem won for “The Marshall Mathers LP 2.” It is the record sixth time that Best Rap Album has gone to Eminem, the top-selling hip-hop artist of all time.

Iggy Azalea, a white Australian who has become a cultural flashpoint for performing in an African American accent, was one of the night’s big losers.