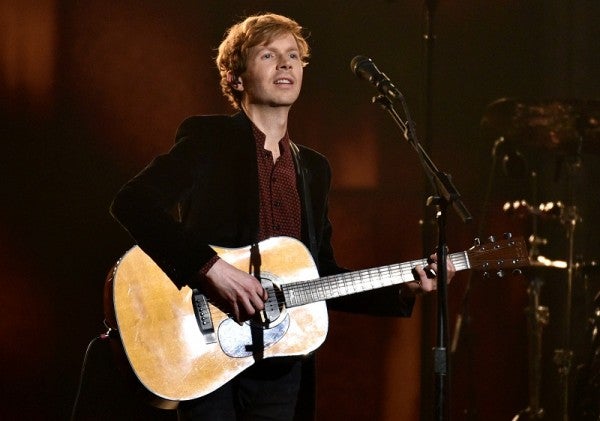 LOS ANGELES — Beck, the innovative rocker who has enjoyed critical acclaim for two decades, on Sunday beat major commercial acts to win the most prestigious Grammy for Album of the Year.

It was the third time he has been nominated for Album of the Year but he had not won before.

Beck beat out a field that included superstar Beyonce, rising newcomer Sam Smith and Pharrell Williams, the creator of the viral hit “Happy.”

“We made this record at my house for the most part. So I’d like to thank my kids for letting me keep them awake a little bit extra longer,” Beck said.

The 44-year-old Los Angeles native has experimented widely with styles over his career. In the early 1990s, he merged the era’s alternative rock with funk and hip-hop and layered them with ironic samples and vocals as epitomized in the song “Loser.”

But Beck has proven capable of quickly changing his style. The 2002 album “Sea Change,” considered the forebearer of “Morning Phase,” offered a stripped-down, rawly emotional reflection on the end of a long-term relationship.

TAGS: Beck, Entertainment, Grammy for Album of the Year, Music