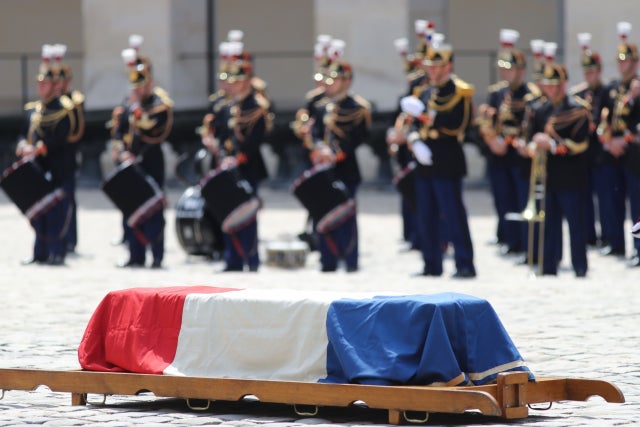 France paid a national homage Thursday to revered filmmaker Claude Lanzmann, whose nine-hour documentary “Shoah” is regarded as the best ever made about the Holocaust.

The director and writer, who died last week aged 92, had to hide from the Nazis with his Jewish family in rural central France during World War II, then leaving them to join the Resistance at 17.

Prime Minister Edouard Philippe led the mourners at the solemn ceremony at the Invalides, which houses Napoleon’s tomb, with Lanzmann’s coffin draped in the French tricolour flag carried into the courtyard by a military honour guard.

“You made exist those who no longer do,” Philippe said of his film masterpiece, which pieced together the wartime slaughter of six million Jews through the harrowing testimonies of the survivors.

“‘Shoah’ is a unique work about a unique crime, it is a cry of defiance and a refusal to forget,” the prime minister added.

Lanzmann even managed to secretly film concentration camp guards talking about their part in the killing, and was beaten up by a group of thugs after his cover was blown while he was filming a former Nazi officer.

‘The Orpheus of the Holocaust’

Philippe said that Lanzmann, a Communist in his youth, had learned his remarkable courage and sense of sacrifice from his comrades during the war.

His own first act of resistance as a Jewish schoolboy in occupied France was to refuse to write an essay in praise of its collaborationist leader Marshal Petain. He later took to the hills to ambush German patrols.

Philosopher Bernard-Henri Levy compared him to Orpheus in his oration, the mythical poet who returns from the land of the dead, working tirelessly to keep the memory of the Holocaust alive.

He described Lanzmann as an “engaged intellectual and quarreller” who was as intrepid later in life as he was as a young member of the Resistance.

“I am completely against death,” Lanzmann told AFP last year shortly after the death of his only son, Felix, from cancer at 23.

The director was laid to rest next to him in the family tomb in Montparnasse cemetery in Paris. His former lover, the writer and feminist thinker Simone de Beauvoir, is buried nearby.

Lanzmann ran Les Temps Modernes, the legendary literary review that she and her partner Jean-Paul Sartre had founded, until his death.