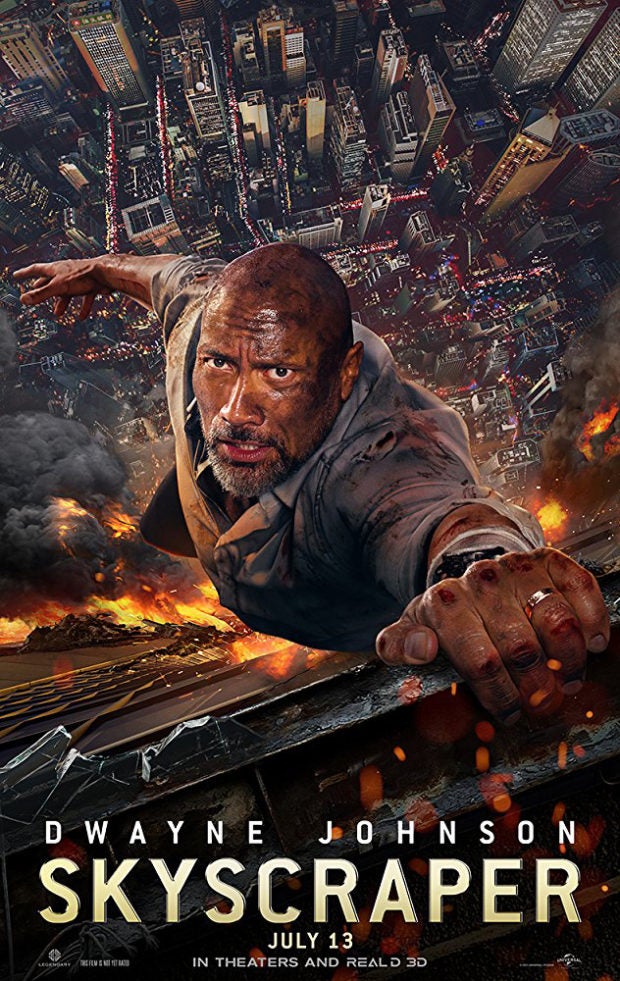 A glance through the summer movie schedules reveals one rather depressing common denominator: every single big budget release is a sequel—apart from one.

Dwayne Johnson cuts a solitary figure in that all-important late May to early August period—when movie-goers seek refuge from the heat in air-conditioned multiplexes—as the only star of an entirely original blockbuster.

Even “Skyscraper,” which hits U.S. theaters on Friday, is something of a 1970s and 80s disaster movie pastiche, with Johnson walking—or climbing, much of the time—the well-worn path of the traditional action hero.

“I wanted to make a movie that was an homage to ‘Die Hard’ and ‘Towering Inferno,’ ‘The Fugitive,’ ‘Cliffhanger,’ movies like that,” the 46-year-old star said at the premiere in New York on Wednesday.

The Universal release casts the former wrestler as a retired amputee FBI hostage rescuer turned security expert who has to clear his name and snare the bad guys when the world’s tallest building goes up in flames in Hong Kong.

It’s been a tough few months for film fans desperate to see something a little more nuanced than giant robots and men in tights larruping each other repeatedly in mid-air.

“There are 11 sequels on either side of us in our corridor. Who really gets to say they are in an original movie that this brilliant mind created from scratch?” said “Skyscraper” producer Beau Flynn, gesturing down the arrivals line to writer-director Rawson Marshall Thurber.

“Everything was created from his head and it is something that has to be admired, I think, by the audience, and hopefully supported. It’s very hard to do that at this scale in Hollywood today.”

“Avengers: Infinity War” and “Deadpool 2” kicked off the blockbuster season, although both were released before what most people think of as the peak period, when school’s out and kids are begging to see the latest Marvel or DC offering.

Since late May, we’ve been treated to “Solo: A Star Wars Story,” “Action Point” — part of the “Jackass” series of movies —”Ocean’s 8,” “Incredibles 2,” “Jurassic World: Fallen Kingdom,” “Sicario: Day of the Soldado,” “The First Purge” and “Ant-Man and the Wasp.”

If they all sound familiar, it’s probably because you’ve seen or heard about their relatively similar predecessors — and we still have “Mamma Mia! Here We Go Again,” “The Equalizer 2” and “Mission: Impossible – Fallout” to sit through before the August schedules bring back more creative storytelling.

It hasn’t entirely been a summer of retreads, capes and spandex suits, of course.

“Adrift,” based on the true story of a couple who get stranded in the Pacific Ocean, was a “one-and-done” but its uninspiring box office was largely offset by a budget constrained to around $35 million.

Universal pushed the boat out for “Skyscraper,” splashing out $125 million on a movie that has around 1,600 visual effects shots.

Ironically, given its unique status among the summer sequels, “Skyscraper” has been criticized for being derivative, and was liked by just 49 of 100 critics whose reviews were collated by the Rotten Tomatoes website.

It has been admired in some quarters, however, for presenting women in empowering roles, including Neve Campbell, who plays Johnson’s hard-as-nails ex-military wife.

“As a woman right now, to be able to play a role that might be a role model for younger girls who can say, ‘It’s all right to be strong and courageous and successful in your own right’—that feels good,” Campbell said.

Johnson, who is not usually a political figure, used a central theme of the movie to fire a red carpet fusillade at President Donald Trump—whom he didn’t name—for separating migrant children from their parents at the southern border and locking them in cages.

“(‘Skyscraper’) has an anchor, and that anchor is family—protecting your family and keeping your family together. Very relevant these days, considering everything that’s happening,” he said. MKH