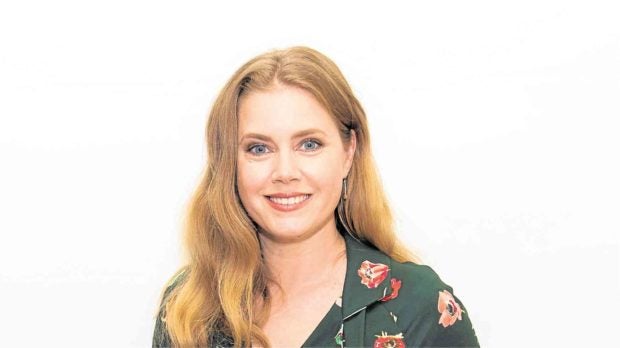 LOS ANGELES—Add Amy Adams’ portrayal of a self-loathing, alcoholic reporter in HBO’s “Sharp Objects” to her list of masterful performances that were previously limited to cinema: “American Hustle,” “The Fighter,” “Doubt,” “Junebug,” “The Master,” “Arrival” and “Big Eyes.”

In her first major television role, Amy is unforgettable in director Jean-Marc Vallée’s adaptation of Gillian Flynn’s novel about journalist Camille Preaker (Amy) who, after a short stay in a psychiatric hospital (for self-harm—her pain is literally cut in words on her skin), must return to her small hometown to cover the murders of two preteen girls.

Amy, a Golden Globe winner (for “American Hustle”) and a five-time Oscar nominee, will be seen next on the big screen in director Adam McKay’s “Backseat,” a biographical drama on Dick Cheney (Christian Bale), who is considered the most powerful vice president in US history. She plays Lynne, Cheney’s wife, an author and former talk show host.

Can you talk about the process of putting on those scars from your character’s self-harm? Putting the marks on was a very long process. It took about four hours when we did the full body scars. The first couple of times was trial and error, which was funny because they were actually made with glue.

I had to stand there pretty much naked for four hours. I’m not shy, but I’m not an exhibitionist. So that part really made me feel vulnerable, which helped when I stepped into the set, exposed in that way.

So how did you get through the sex scenes? We see it inside of sexual situations, but it’s not necessarily shown in a sexual way. It’s not meant to be enticing. It’s meant to tell the story.

Jean-Marc Vallée has said that his way of working is to push hard. How did you work with that? It’s not so much that he pushes. He just doesn’t stop. I never felt him take me past a point of comfort with his words or direction. But in the nature of not leaving the scene, always starting from the beginning, you get so exhausted that you can’t do anything but tell the truth.

You drop all your ideas of what the scene is and start to live in it. 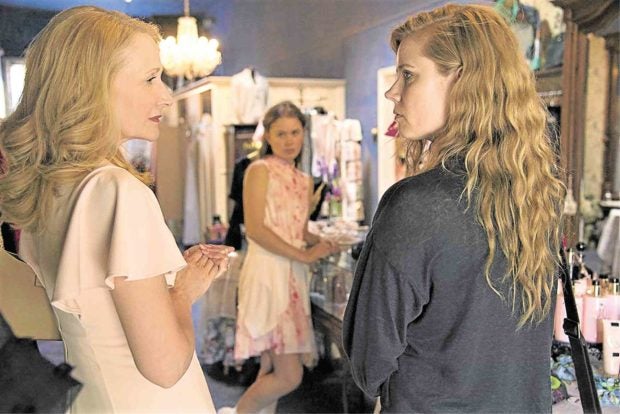 In this show, there’s an interesting perspective on the saying you can’t go home again. What does going home again mean to you as an adult in real life? I find, at least within my own dynamic, that going home often brings you back into the drama, which motivated you to leave (laughs). So, you sometimes fall into the roles that you adopted, healthy or unhealthy, as a child. It’s hard to break out of those patterns, especially if they’re dysfunctional. It’s easy to get pulled back in.

The examination of parent-child relationship—in this case, mother (Patricia Clarkson) and daughter (her character, Camille)—always makes for good drama. In this show, it’s cathartic in a way, even as they rip each other. Yeah, they definitely seem to have an allergic reaction to one another. It’s such built-in drama that’s easy for people to identify with because we all have a mother and a father. How they affect us for the rest of our lives.

I used to be so worried about being a perfect parent. But they said to me, if you’re perfect, then your daughter will be going to therapy because you were too perfect, and she’ll never live up to it.

Your character and her mom’s relationship is painful to watch. In your childhood or teenage years, what memories do you have of your parents? No, honestly, the only things I clashed about with my parents was that I kept a messy room. And my mom always wanted to challenge me outside my comfort zone. I tended to be very fearful.

I remember one time she took me rock climbing. I started freaking out, and she wouldn’t let me down. She was like, nope, there’s only one way—it’s up. But I wasn’t a disciplinary problem.

Your character has an intense relationship with Patricia Clarkson’s character. Did you avoid her and the other actors to keep the dynamic? No, I ended up really close with most of the actors I worked with. Having a natural camaraderie, having the ability to decompress together allows for different kinds of trust. And so, with Eliza (Scanlen), Elizabeth (Perkins), Patricia (Clarkson), Matt Craven and Chris Messina, we all spent a fair amount of time talking or hanging out afterward. It felt like the kind of set where you needed to decompress to get back to our real selves.

Was not worrying about how you look a relief for you? I really enjoyed approaching this role with a certain lack of vanity. I didn’t even think about how I’d feel about it until I started watching it. But it’s actually freeing to dive into a character without vanity.

How did you shape this character from scratch? The book is such a wonderful place to start. Gillian described the character in the book as so driven by her internal monologue that there was so much there for me. Everyone else’s opinion of her is what helped shape this sadness inside of her, and this need to claim her own truth with the words on her body.