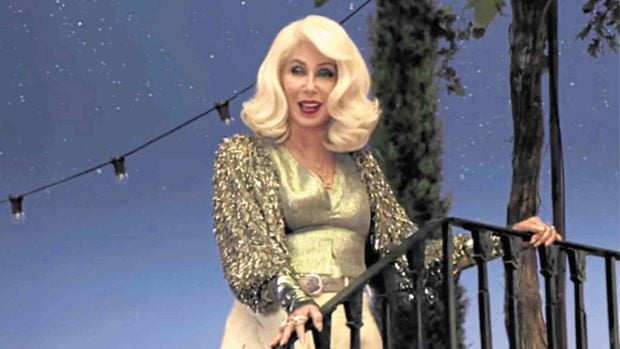 LOS ANGELES—Cher’s union with Sonny Bono (who passed away in 1998) produced Chaz Bono, who underwent female-to-male gender transition in 2008. She has another son, Elijah Allman, with her second husband, singer-musician Gregg Allman who died in 2017.

“Chaz was just on ‘American Horror Story,’” Cher proudly gave an update of her sons. “And Elijah is working on some music right now. He’s doing a project that I can’t talk about, but it’s really interesting. It’s something that he’s never done or I didn’t even think he would be doing.”

Cher understands that having her—a colorful, popular, larger-than-life personality—as a mom must have been quite an experience for Chaz and Elijah. “It’s not fun for them,” she quipped with a chuckle. “I’ve been famous their whole lives. It’s been a pain for them.

“This is so silly, but I remember going to Olvera Street (in Los Angeles) with Chaz. We were having the best time, then all these people were coming up and I finally said, ‘Chaz, go sit in the bus.’ It was a school trip, but because it was just ruining everything. Photographers—that’s scary for a child.”

“They know who I am, but the outside personality doesn’t have too much to do with me or them, because I don’t go around looking like this,” continued the star, all glammed up in black velvet with gold/yellow print accents, her face framed by a mass of brunette curls. “When I’m at home, I’m in sweatpants and no makeup. That’s how they know me better, and that’s how they know me more.”

While she plays a grandma in “Mamma Mia! Here We Go Again,” she’s not yet one in real life. “I don’t have any grandchildren. I wish I did. Grandparents are more fun than parents. I poured my grandmother’s perfume down the toilet once. And all she did was laugh and say, ‘Oh, isn’t she adorable? What a funny thing.’ One of my grandmothers was easier to get along with than the other, but I got along with both of them.

“In this movie, I’m not so welcome because I wasn’t such a great role model. So when Amanda (Seyfried, back as Sophie) says, ‘What are you doing here? You’re not invited,’ it takes my character a little while to earn her way back into the family.”

Cher, Andy Garcia and Lily James are the newcomers in the cast. Everyone else from “Mamma Mia!” is back, aside from Amanda: Meryl Streep, Dominic Cooper, Christine Baranski, Pierce Brosnan, Colin Firth, Stellan Skarsgard and Julie Walters.

Of Abba’s Benny Andersson and Björn Ulvaeus, who composed the quartet’s hits, Cher said, “I have met Benny, but I haven’t met Björn. But this is crazy. I was looking at something on the computer and it came up—that great music video with the puppets. That was their last video and all of a sudden, I’m in it. I didn’t really remember doing it, then it came back to me, but I don’t know why they asked me to do it.

“I’m just standing there in the recording studio with a bunch of other people and I’m rocking out to them and applauding. So, there was no reason for it. I have no idea what happened, but I didn’t realize that I was really a fan.”

She added, “I sent Benny a text. I never realized how complicated the ABBA songs were because they sound just like regular pop songs. They go from one hook to another, then all the music is hooked.

“So, I really liked their big hits. Not all of them, but then I remember when I saw ‘Muriel’s Wedding,’ that was when I got hooked to their music. I became enamored with them, and in this movie, the songs are so amazing.”

Asked whose career is perfect, Cher had a quick answer: “It would be Meryl’s career. I can’t think of anyone better. She balances her life well. And she’s easygoing. I emailed her, and went, ‘I’m not happy with the way I look in one (photo contact) sheet (for the movie)—I’m too dark. She wrote me back, ‘Stop it, OK. It doesn’t make any difference. Just give it up and let it go.’ And I went, alright. But I didn’t let it go (laughs).”

The two actresses have remained friends since they made “Silkwood” 35 years ago. “We’re always in touch,” Cher stressed. “She did a really funny thing. I was on the set one day, and I was doing my song. I saw this shadowy figure lurking around one side. Meryl had snuck onto the set to watch me do my song. Then afterward, she just came up, and she was squealing. We were laughing and hugging each other. My assistant said she had been there the whole time. We talk and email and do stuff all the time.”

On how she finds time to be an actress, singer, live concert performer, philanthropist, songwriter and producer, among others, Cher answered, “I don’t know. I should be dead (laughs). I don’t do it very well. I usually pick too many projects at one time, but I usually do the thing that sounds like the most fun. I’ve gotten myself into a lot of trouble.

“Like when someone asks, ‘Do you want to sing “The Star-Spangled Banner”?’ ‘Sure, that sounds like fun.’ Then, you get there (‘Super Bowl’ in 1999), and you’re terrified. It was one of the most terrifying experiences I’ve ever had. But, that’s how I always pick things.”

Asked about the upside and downside of being Cher, she replied, “It depends. There are lots of negative and positive. You can’t get something for nothing.

“So, I can’t sum it up. It’s impossible to do that. It’s like if someone says, sum up your life, and you go, oh, sometimes it’s good and sometimes I want to tear my hair out.”

Any regrets? “We don’t have enough time (to talk about those),” she cracked with another one of her trademark laughter. “But yeah, there are regrets. Failure is necessary. Failure is highly underrated because when you are successful, you never go, oh my God, why am I having this? But, when you’ve just had a failure, you think about it. You ruminate, and you want to explore it—and it makes you better.”