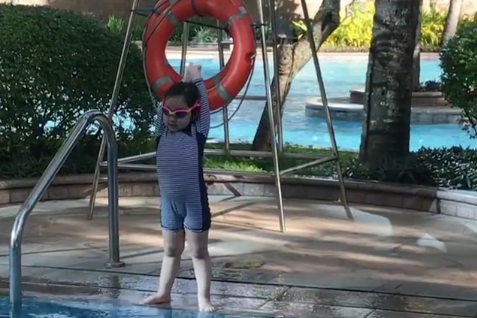 Fans of Scarlet Snow Belo know that the three-year-old is a jack-of-all-trades even at a very young age. Now, the social media darling learns another skill to add on her impressive record: diving into the water a la Michael Phelps.

Scarlet Snow’s official Instagram page on Friday, June 29, shared a video of her practicing her newfound skill. “Peoples, can you score my dive from 1 to 10 like in the Olympics please?” fans were asked.

Arms up, feet wide open, the toddler excitedly executed the diving position. Her swimming instructor can be heard jokingly saying, “You are not a baby shark, you’re a diving little girl,” in the background.

When she was given the “go” signal, the social media darling performed the dive, only to fall in the water unsuccessfully. Her instructor went to her aid immediately, asking her, “What was that?” Despite her failed attempt, Scarlet Snow looked like she enjoyed her practice.

Her mother, Dr. Vicki Belo, posted another Instagram video of the toddler practicing her new skill. This time, Scarlet Snow managed to execute her dive successfully.

It seems Scarlet Snow is also already showing signs of becoming a successful businesswoman in the future, if the video Vicki has posted last Wednesday, June 27, is any indication.

“Daddy @dochayden is teaching @scarletsnowbelo to do business selling toy popsicles and ice cream,” says Vicki. “This is what my mother Nena Belo did when I was 4 years old so that I could learn the joy of making money.”

Considering Scarlet Snow’s age, her fans are surely looking forward to seeing what the future has in store for the gifted toddler. JB

WATCH: Scarlet Snow swings like a monkey in gymnastics class