Though Pauleen Luna is known for being a Kapuso star and a regular on “Eat Bulaga,” the actress had a stint in ABS-CBN for a few years.

She harked back to that time with a photo of her from 2002 along with batchmates from Star Magic Circle Batch 11 Pia Wurtzbach, Glaiza de Castro, Carla Humphries and Sarita Perez de Tagle.

The photo, “taken with a film camera” at her former network’s canteen, shows the four young ladies bonding over a meal while De Castro hangs in the back.

From left to right, the seated girls are Wurtzbach, Perez de Tagle, Humphries and Luna. Back then, they would have been between 13 and 16 years old.

Star Magic executive Thess Gubi couldn’t help but gush in her comment: “One for the books… nene (young girl) days.”

Luna was part of the 2002 series “Berks,” which starred Heart Evangelista and John Prats. De Castro and Humphries were also part of the cast.

Other actors who were in their Star Magic batch included Maja Salvador, Rayver Cruz, Rodjun Cruz and Nikki Gil.

Luna has remained close to Wurtzbach, who was her bridesmaid when she  was wedded to Vic Sotto in 2016. 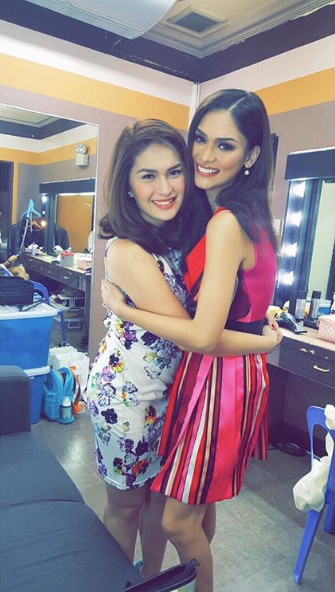 The Miss Universe 2015 winner is currently pursuing a career in acting, having starred in the movies “Revenger Squad” and “My Perfect You.”

Meanwhile, De Castro continues to act and perform music as a GMA artist. Humphries has chosen the indie route, acting in ABS-CBN shows while taking on movies like “Smaller and Smaller Circles.” Perez de Tagle has left the showbiz industry.  /ra

John Prats does a throwback to his ‘Ang TV’ days