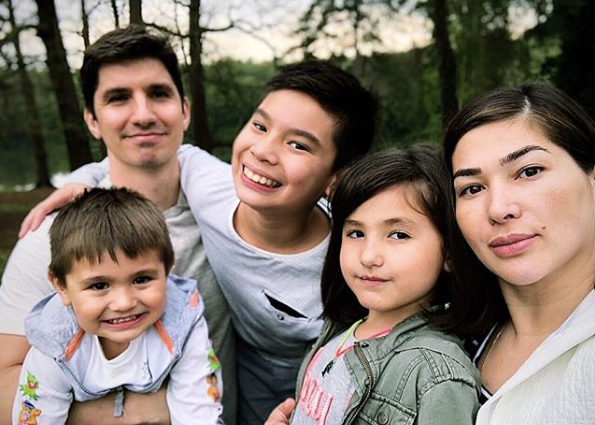 After reuniting with her eldest sons Andre and Kobe Paras, Jackie Forster is further strengthening her family’s ties by trying to reconnect her second family to her Filipino roots.

Forster brought her husband Michael and three children Jared, Caleigh and Yohan to Manila after years of living abroad in different countries, due to her husband’s job in a multinational company. Recently, the family has been based in London.

“Home is where the heart is,” Forster wrote of pictures while on a plane en route to Manila. “@_kokopares and @andreparas [Kobe and Andre] see you soonest!”

The children took a trip to Manila Zoo where Jared fearlessly held a python while it hung around his neck. Meanwhile, little Yohan had a tamer animal clutch on to him: a bright red parrot. Caleigh had the chance to feed an elephant with bananas.

Forster reunited earlier this year with her two sons after over a decade of being apart. In 2007, the former actress left for Singapore where she took makeup and hair styling classes.

Forster claimed in a 2013 “The Buzz” interview that after she left, she was prevented from seeing her sons with then-husband star cager Benjie Paras. Over the years, she has attempted to reach out to them.

She told the Philippine Entertainment Portal in an April 2018 exclusive interview that it had been Kobe who called her in January 2018 while he was in the United States and she was in London. She was overwhelmed by their 40-minute exchange and even wondered if something was wrong. However, it seemed the phone call was simply about a son who wanted to see his mom.

Days after the call, Forster flew to California to see her second child. She would end up spending a month there and even managed to have Kobe meet his younger siblings in February. At that time, Andre couldn’t join them since he was in the Philippines, though they were able to get in touch through video calls and chat.

On April 29, Forster shared on Instagram that she had happily reunited with Andre and Kobe in person.

This visit to Manila is Forster’s chance to finally see all her five children together. Based on the family’s social media posts, Kobe has spent time with the young ones in Manila.