Lawyer fights for Harvey Weinstein, in court and out 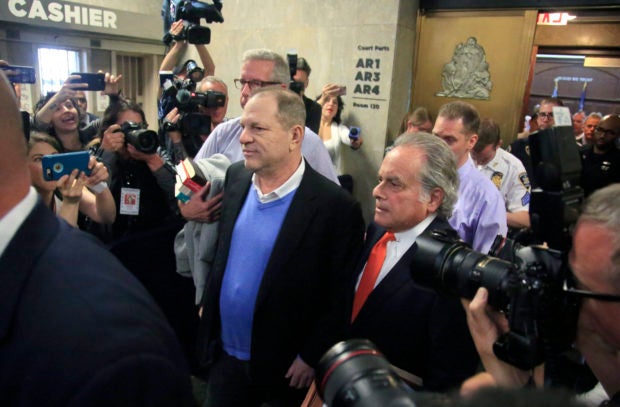 In this May 25, 2018, file photo, Harvey Weinstein, center, leaves with his lawyer Benjamin Brafman, right, after posting bail at Manhattan’s Criminal Court in New York. Brafman was on the winning end of that scenario in 2011 when he helped former International Monetary Fund director Dominique Strauss-Kahn beat an attempted rape charge. Seven years later, Brafman has an even bigger challenge: defending Weinstein against sex crime charges. Image: AP/Bebeto Matthews

Brafman, 69, was on the winning end of that scenario in 2011 when he helped former International Monetary Fund director Dominique Strauss-Kahn beat an attempted rape charge.

“I’m trying my best to save him in somewhat of an impossible situation he finds himself in,” Brafman told The Associated Press.

Saving unpopular clients in impossible situations is something of a specialty for Brafman, whose list of past clients includes professional athletes, celebrities and wealthy businessmen in trouble, some so vilified many lawyers would shy away from them.

He said in the past year he’s gotten to know Weinstein as someone with “a forceful personality” who “soaks up all the oxygen in the room,” but steadfastly maintains his innocence.

In Brafman, Weinstein gets a tactical and pugnacious lawyer willing to fight for him inside court — and outside, too, in pressure-cooker conditions.

With Strauss-Kahn, Brafman had a case that came to center on the credibility of a hotel maid who had accused the influential French diplomat of sexual assault.

Compared to Strauss-Kahn, Weinstein’s case appears to be a much heavier lift: He faces more serious allegations of raping one woman in a hotel room, plus forcing another to perform oral sex in his office. On top of that, there are dozens of similar allegations against his client by actresses and other women and a climate of outrage fueled by the #MeToo movement.

After Weinstein turned himself in May 25, Brafman came out swinging, telling reporters: “Mr. Weinstein did not invent the casting couch in Hollywood,” and that “bad behavior is not on trial in this case.”

In the AP interview, the lawyer said he felt compelled to strike back against months of what he calls unfair press coverage fueled by leaks by authorities investigating the case. He also claims Vance is under intense political pressure to get a conviction, further stacking the odds against Weinstein.

“I think part of my ethical responsibility to a client in a high-profile case is to try and prevent a conviction by what’s happening outside of the courtroom,” he said. “And when there is a tsunami of bad press in a case like this, for example, I have to be able to try and level the playing field.”

He added: “I’m not defending the crime of rape. To falsely accuse a person of rape, however, is equally offensive. And in this case, I believe that there are a number of very well-known personalities who have made accusations against Harvey Weinstein that are just patently false.”

An Orthodox Jew who is the son of Holocaust victims, Brafman was raised in Brooklyn and Queens. He graduated from Ohio Northern University College of Law, and served as an assistant district attorney in Manhattan in the mid-1970s before building his defense practice.

In 2001, Brafman won an acquittal for hip-hop star Sean Combs after he was accused of toting an illegal handgun into a crowded Manhattan nightclub. Brafman says it taught him a lesson about managing hard-charging clients used to calling all the shots.

He had less success muzzling another big-name client, Martin “Pharma Bro” Skhreli, who was convicted at a high-profile trial last year of cheating hedge fund investors.

Even after he was found guilty, the former pharmaceutical CEO — notorious for inflating the price of a life-saving drug — kept taunting the likes of Hillary Clinton on social media, prompting a judge to revoke his bail. Skhreli ended up receiving a seven-year sentence.

Brafman also represented conservative author and filmmaker Dinesh D’Souza, who pleaded guilty to making illegal campaign contributions and was sentenced to probation. D’Souza was back in the news last week when President Donald Trump announced he was pardoning him.

Kenneth Montgomery, a lawyer who has represented an accuser in a rape investigation, said Brafman’s willingness to engage the media is understandable in a legal system where “the government has a lot of power, and in a day and age where the media affects people’s opinion.”

Some defense attorneys stay pointedly mum outside court, but speaking to the media can make sense if “you want to get in front of” the public narrative of a case, Montgomery said.

Attorney Douglas Wigdor, who represented the maid who accused Strauss-Kahn, said Brafman “advocated on behalf of his client and used all his connections and skills to his client’s advantage, and I can’t really begrudge him for doing that.”

In any case Brafman takes, “I think the client feels my passion for the work that I’m doing,” he said. “I’m not a robot. I’m not just a hired gun. I get paid well, but I earn every single penny.”

“People ask me if it’s fun to be Ben Brafman at a time like this,” he said. “It’s fun for about a minute. And then it’s just really hard work and an awesome responsibility.” CC

Read Next
Is Ellen Adarna showing off her engagement ring?
EDITORS' PICK
Been there, done that but what’s the difference between MECQ and GCQ?
Smart 5G goes live
A gem of a residence in the new normal
Water remains our saving grace right now
BREAKING: 3,226 latest COVID-19 cases bring PH’s total to 106,330
PNP: Checkpoints back in MECQ areas
MOST READ
MECQ guidelines in infographics
Health workers decry colleague’s death from virus; accuse gov’t of neglect
Lacson takes up cudgels for health workers ‘threatened’ by Duterte
MECQ in NCR, other areas: Mass transportation suspended, quarantine pass required anew
Don't miss out on the latest news and information.