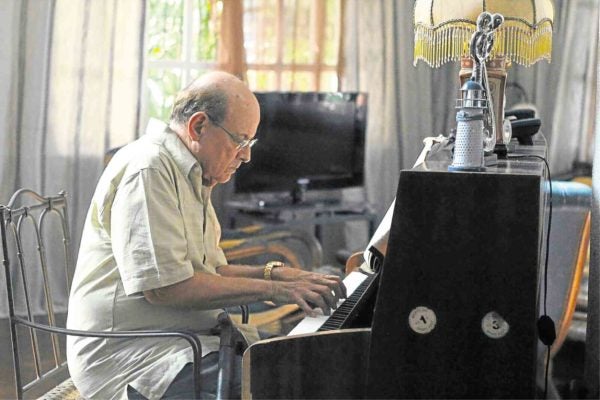 Jaime Fabregas plays piano on the set of “Delia & Sammy.”

Most millennials and TV junkies may only know Jaime Fabregas as the avuncular policeman in “FPJ’s Ang Probinsyano,” but a quick peek into his IMDb page yields a stellar filmography not only as an actor, but also as a music scorer.

He first crossed paths with the original Probinsyano, aka Fernando Poe Jr., as scorer of “Batang Quiapo,” the Action King’s 1986 starrer with Maricel Soriano.

He did most of his work as a scorer under Regal Films in the 1980s, he recalled. By mid-2000s, Jaime’s music took a backseat, as more acting assignments rolled in. “I’m a bit out of touch with the latest technology,” he owned up. “And there are a lot of young musicians now.”

However, he cannot easily give up on music and has started rebuilding his old scoring nook at home. “But, it’s not for me anymore. I am giving it to my 21-year-old son Emilio, who’s interested in music.”

His two younger sons are both musically inclined. “My other son Leandro, who took up psychology in Ateneo, plays bass in a band.”

Jaime sheepishly explained that he had discovered music rather late in life. “I started acting in plays at age 9, but only picked up the guitar at 13.”

As luck would have it, there was a piano on the set of his latest movie, Therese Cayaba’s “Delia & Sammy.”

To pass the time between takes, Jaime tinkered on the ivories—a seldom-seen display of artistry that was recorded for posterity by the movie’s producer Sher Bautista, who then posted the video online. “I don’t really play the piano,” he quipped. “It’s all oído.” 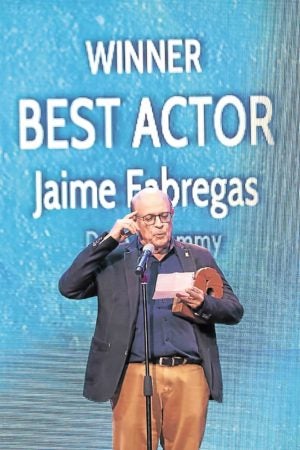 Although he has bagged several trophies as film scorer, he has also won his fair share of acting awards—most notably, best supporting actor for Marilou Diaz-Abaya’s “Jose Rizal” from the Urian and his latest, his first best actor for “Delia & Sammy” at the CineFilipino fest.

In local movies, whenever there’s a need for a patrician Spaniard, Jaime is the usual go-to guy—a lifelong assignment that was set in motion with his first proper movie, Eddie Romero’s “Ganito Kami Noon … Paano Kayo Ngayon?” in 1976.

“I was a theater actor. Eddie saw me in a play and hired me for the period movie,” he recalled.

Acting, he conceded, can be sheer torture. You are constantly hounded by doubt and uncertainty, he admitted.

Like costar Rosemarie Gil, he was incessantly questioning himself on the set of “Delia & Sammy.” He was determined not to let his performance as an Alzheimer’s sufferer deteriorate into a caricature.

“My job was to make Sammy credible,” he recounted. “Since I couldn’t interview an actual Alzheimer’s patient, I watched documentaries and did research.”

“Truth,” he said, is an actor’s primary responsibility. He took extra precaution not to offend people living with Alzheimer’s. Needless to say, the “challenging” role kept him on his toes. “Nothing can make actors secure; not even awards,” he
remarked. “As they say, you’re only as good as your last show.”

He has a healthy relationship with job-related anxieties, which he calls “positive stress” because these trials push actors to give their best.

“People still expect actors to look good and perform well even after 20 hours of work,” he gasped. “That’s the reality of the local television industry.”

There’s a glimmer of hope, though. “The network will try to implement a 12-hour workday. Plus, we will be assured 12 hours of rest, too.”