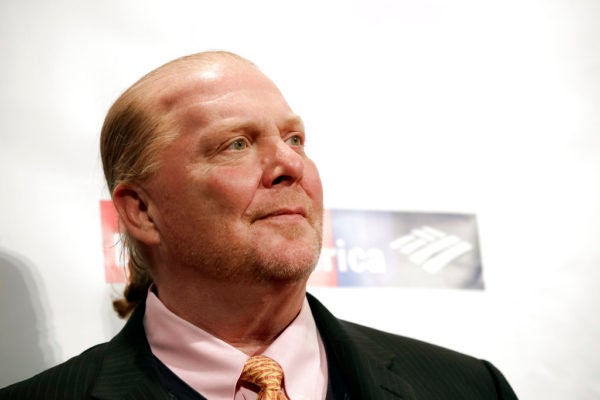 Batali had already stepped away from his eponymous gastronomic empire over previous allegations of sexual misconduct.

One woman who was employed at one of Batali’s establishments said he invited her to a party at “The Spotted Pig” restaurant, in which he had invested, where she drank white wine with him.

“I remember a moment where I was on his lap, kissing him. Like, he was kissing me. And then I remember throwing up – in a toilet. And that is all,” the unidentified woman told “60 Minutes.”

After finding what appeared to be semen on her skirt, she called a crisis hotline and went to a hospital for an examination but declined to file a police report, and her “rape kit” from the hospital was not processed.

Batali, in a statement, has “vehemently” denied assaulting the woman.

Jamie Seet, a former manager at “The Spotted Pig,” said she witnessed via surveillance footage Batali carrying out another assault at the restaurant, and that she intervened to stop it.

“He crossed a line. A huge, a huge line… assaulting someone that’s unconscious,” Seet said.

“So we all went out there, and we – we stopped what was going on. ‘Hey, Mario. How are you doing? Let’s get you a cab.’ Just – you know, we were saying something just to snap him out of this,” Seet said, adding that she regrets not contacting police.

One of the most famous figures in American cuisine, the 57-year-old Italian-American is a popular TV personality whose empire includes 26 establishments nationwide, as well as cookbooks, cookware, and food products.

Controlled by private shareholders, the group does not publish its accounts, but United States media has estimated its worth to be at least $250 million.

According to CBS, the New York police confirmed that “there is an ongoing criminal investigation into Mario Batali.”            /kga

Read Next
Bruno Mars kicks things up a notch in Manila show
EDITORS' PICK
Leveling up your ‘lutong bahay’ with the kitchen companion you never knew you needed
SM prepares for ‘safe malling’
Notice of 2020 regular meeting of stockholders June 18, 2020
LIST: What to expect in areas under GCQ, MGCQ
Drilon wants repeal of penal provisions in proposed Bayanihan extension law
DOTr bares 2 phases of public transport revival in GCQ areas
MOST READ
LIST: What to expect in areas under GCQ, MGCQ
Duterte approves Metro Manila’s shift to GCQ starting June 1
Hong Kong loses US ‘special status’ — what next?
National Guard called to respond to Minneapolis violence
Don't miss out on the latest news and information.