Bruno Mars kicks things up a notch in Manila show 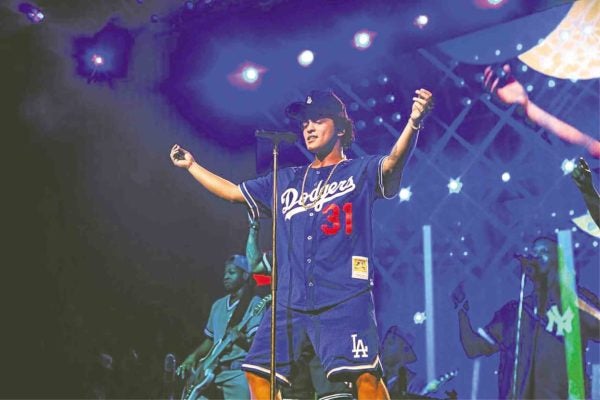 Fans couldn’t help but squeal at the slinkiness in which Bruno Mars slid and shuffled.

Sporting colorful jerseys and sneakers, Bruno Mars, and his band, The Hooligans, looked liked their friendly basketball game had unexpectedly gone overtime, and had to dash straight to the club without changing, so they wouldn’t get late for their dates with their respective girls.

Actually, make that thousands of girls—all raring to move their bodies to sticky sweet funk-pop ditties, waiting to be serenaded with old-school R&B balladry, at the SM Mall of Asia Arena, where Bruno held a two-night concert recently, as part of his ongoing “24K Magic” world tour.

He opened the concert with “Finesse,” the bouncy, new jack swing-inflected bop that evoked feel-good 1990s nostalgia. And already, revelers were dancing and swooning.
It wasn’t hard to see why. He doesn’t just perform for an audience—he makes love to it.

Whatever he did— whether it was an imperative choreographic passage, or something as trivial as catching a face towel to wipe his face with—almost always came off as a come-hither move.
Fans couldn’t help but squeal at the slinkiness in which he slid and shuffled onstage; at his sporadic bursts of forceful dance moves that oozed out of him; and at his cheeky hip thrusts in “That’s What I Like,” where he sang of having “sex by the fire at night.” 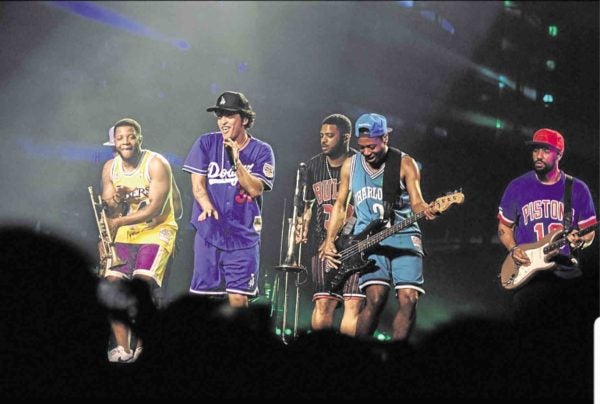 For the most part, the atmosphere onstage—although fashioned after a 1970s disco floor—was that of a rambunctious street party, with Bruno goofing around with his bandmates. They fed off each other’s unwavering energy, as they sang and played instruments, which produced a steady rush of retro rock, soul, funk and R&B—all burnished to the sheen of contemporary pop.

The American singer-songwriter’s biggest strength as a performer is, perhaps, the fact that he doesn’t have an apparent weakness. Bruno’s showmanship is undeniable, inspired by the greats he idolized growing up, such as James Brown and Michael Jackson. He can play the guitar and the piano with proficiency. And he does all these while serving live vocals that, at times, even surpassed what he did on record.

As if his hit baby-making jam “Versace on the Floor” wasn’t challenging enough, Bruno ramped it up by adding more high notes in its extended intro.

“Runaway Baby” had him playing with volume, as he shimmied away and back toward the microphone stand. In the piano ballad “When I Was Your Man,” he let it rain with nimble improvised riffs.

Bruno, whose mother was Filipino, knew exactly what to do to kick things up a notch in Manila.

Midway through the show (organized by MMI Live and Smart Music Live) he took on the smooth, doo-wop-inspired tune “Calling All My Lovelies.” And to deafening roars of approval, he whipped out a prop mobile phone, then belted out onto it, pleadingly, “Miss na kita, Mahal!”

“I bet they didn’t know we can speak Filipino…” Bruno hollered, breaking into a mischievous grin. 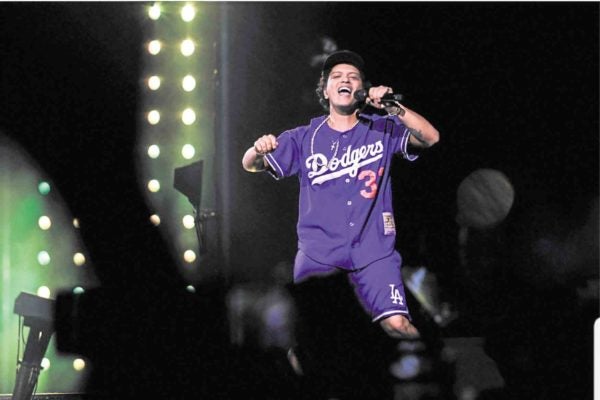 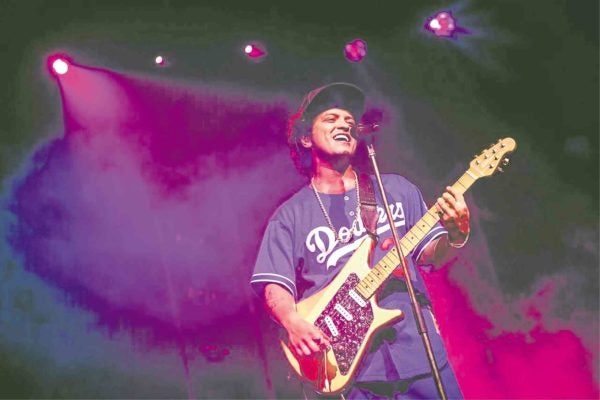 His showmanship is inspired by the greats, such as James Brown and Michael Jackson. —PHOTOS COURTESY OF MMI LIVE