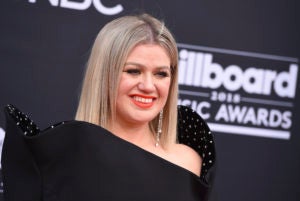 Kelly Clarkson arrives at the Billboard Music Awards at the MGM Grand Garden Arena on Sunday, May 20, 2018, in Las Vegas. (AP)

An emotional Kelly Clarkson opened the 2018 Billboard Music Awards in tribute to the recent school children and teachers who died in Texas, barely able to speak as she urged the audience and the world to do more to prevent deadly shootings from happening.

Clarkson, who is hosting the show, said she was asked to hold a moment of silence for the 10 victims who died Friday, but chose instead to call for “a moment of action.”

“Once again we’re grieving for more kids that have died … I’m so sick of moment of silences … it’s not working,” she said Sunday, almost in tears. “Mommies and daddies should be able to send their kids to school.”

The Texan and mother of four added, “I can’t imagine getting that phone call or knock on the door.”

Ariana Grande followed Clarkson with an energetic performance of “No Tears Left to Cry,” which earned a loud applause from the crowd at the MGM Grand Garden Arena in Las Vegas.

Clarkson, who has become a fan favorite as a judge on “The Voice,” returned to tell jokes that won over the audience. She sang a medley of hit songs, including Taylor Swift’s “Look What You Made Me Do,” Imagine Dragons’ “Thunder” and Kendrick Lamar’s “Humble.”

Though Taylor Swift, Grande and Clarkson are in attendance, the night belongs to Janet Jackson.

After celebrating her 52nd birthday and the 25th anniversary of her groundbreaking “janet.” album, Jackson will be capping off an epic week with her first televised performance in nine years at the show, where she will also receive the Icon Award.

Lamar, Bruno Mars and Ed Sheeran tied for the most nominations with 15 each. They are up for the night’s biggest award — top artist — along with Taylor Swift and Drake.

Nominees for top Hot 100 song are Lamar’s “Humble,” Mars’ “That’s What I Like,” Post Malone’s “Rockstar,” Sheeran’s “Shape of You” and “Despacito,” by Luis Fonsi, Daddy Yankee and Justin Bieber.