I just know it is really more fun here 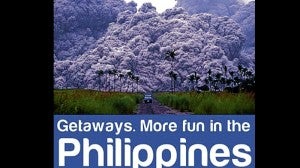 In late 2003, I was privileged to be part of a Department of Tourism (DOT) campaign to urge Filipinos to visit more of our beloved country.

A new campaign was recently launched, with a slogan that has generated much attention, especially on the Internet: “It’s More Fun in the Philippines.”

I’ve been checking out people’s reactions to it. On one front, there has been quite a positive response, with Netizens creating their own unique spins on the slogan.

There is a photo of a Ford Fiera fleeing the wrath of Mount Pinatubo, with this caption: “Getaways. More fun in the Philippines.” I cackled when I saw it. It was so clever, I reposted it on my Facebook wall.

On the negative side, the slogan itself has been criticized as being lifted from a Swiss tourism campaign from the 1950s.

But if the Netizens’ various takes on the slogan are to be used as reviews, I think this new campaign is a success.

A lot of people have used their imagination in capturing what spells fun in our country: pictures of the Cebu prison dancers… waterfalls… girls and their surfboards…  lechon… a bahay kubo being carried to its new address… the Pahiyas Festival… a baby tarsier… a hill of barbecued meats and animal parts… and a lot of Donsol butandings.

Late at night, when I’m watching TV alone, I see the other Asean countries’ tourism commercials and wonder if we’ll have our own—one that shows our country’s staggering, unique, natural beauty and the abundant charm of our people.

Well, the new DOT campaign has shown both. And Filipinos have added a bonus: humor. Who else would look at that Fiera with billowing clouds of volcanic ash behind it, and still find something funny?

So yes, I count myself as one of those who really want to give this new campaign a break. There’s been enough negativity surrounding previous efforts (negativity that is tiresome and repetitive).

Our country isn’t perfect, but there is perfection that resides within it. A lot of wrong is going on, but also a lot that’s right, and a lot of good people who are working very hard to make this country great, and great to visit.

To the DOT and the ad agency responsible for creating the “Fun” campaign, congratulations on creating something that Filipinos have embraced, not just as an advertisement, but as a springboard for expressing what we truly believe is wonderful, funny and fun about our country.

I made a mistake in naming Tara Strong as the voice of Buttercup in the Powerpuff Girls series. Miss Strong was the voice behind Bubbles, while E. G. Daily played Buttercup. My apologies for the error.