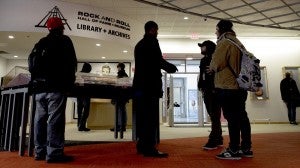 Visitors come into the newly-opened Rock and Roll Hall of Fame and Museum Library and Archives in Cleveland on Tuesday, Jan. 17, 2012. The facility is giving scholars and fans access to the stories behind the music, with new access to a collection that includes some 3,500 books, 1,400 audio recordings and 270 videos. It is the world's largest library and archives devoted to rock and roll music. AP/Amy Sancetta

CLEVELAND, Ohio—The Rock and Roll Hall of Fame and Museum opened its new library and archives to the public on Tuesday to give scholars and fans access to the stories behind the music through such “artifacts” as personal letters from Madonna and Aretha Franklin and 1981-82 video of the Rolling Stones tour.

The collection, catalogued over the last few years, includes more than 3,500 books, 1,400 audio recordings and 270 videos, and is housed in the new four-story, $12 million building.

Thousands more books and recordings and hundreds of videos will be added as previously stored items and new donations are catalogued, said Andy Leach, director of the library and archives.

“We hope to serve music scholars, teachers, students and the general public,” Leach said. “We hope to see all of them here.”

Tuesday’s opening of the building on the Cuyahoga Community College campus in Cleveland, not far from the Rock Hall, occurred without a lot of fanfare. The low-key opening allows the public to enjoy the library before a grand opening April 9. The college funded the building, which the library and archives share with the college’s Center for Creative Arts. The Rock Hall financed construction and furnishings of the interior of its section of the building.

Leach said the Rock Hall has done a great job of telling the story of rock ‘n’ roll. He said he sees the library as bringing the museum more recognition and showing “it to be a serious place of research.”

The library collection also includes movie posters, photos and memorabilia related to Alan Freed, the DJ credited with coining the phrase rock ‘n’ roll; a handwritten list by Elvis Presley of songs included in one of his concerts; and personal letters from Mick Jagger.

Visitors will not be allowed to check out items, but anyone can use the library reading room to browse through books, listen to audio recordings and watch videos. A smaller archives reading room allows supervised access to certain items.

Steve Waksman, an associate professor of music and American studies at Smith College in Massachusetts, did research at the library prior to its opening for his book on the history of American live music.

“It was very useful, with material that I haven’t found anywhere else,” Waksman said Tuesday. “They had a lot of material regarding the stage sets of music performers from the ’60s and the ’70s, such as David Bowie and the Rolling Stones.”

Elizabeth Papp Taylor, 53, of Shaker Heights, was at the library opening day.

“I’m looking forward to coming back for a look at the archives, but my first visit was exciting,” she said in a phone interview. “It’s very impressive.”