‘Ghost Stories’: from spooky to perplexing 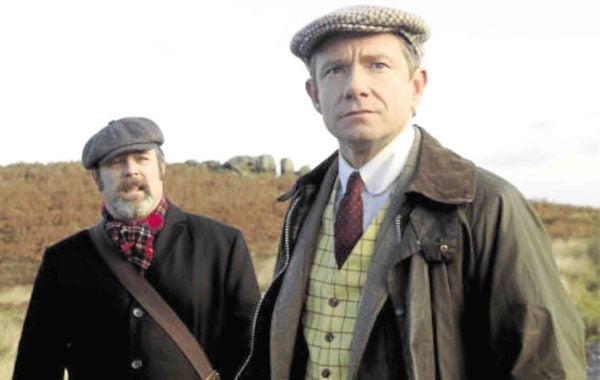 Lifelong skeptic Professor Goodman (Nyman) is also an author and TV host who believes that mysterious phenomena are explainable.

He feels the same when he gets three new cases about people who’ve had bizarre, inexplicable encounters—but, this time, he gets to experience such things firsthand.

The first case leads him to a night watchman (Paul Whitehouse), who used to oversee part of an abandoned correctional facility.

From quiet to horrific

He recounts a quiet night at the building that quickly turned horrific and led him to a spine-tingling discovery.

The second story is about a teenager (Alex Lawther) who lives alone in a haunted house.

He recalls a night of driving without a license, and hitting someone—or something—on a dark road in the woods.

The last tale is about a financier (Martin Freeman) who remembers his night alone in his house, and the strange occurrences that he witnessed.

From creepy to surreal, and eventually absurd, “Ghost Stories” is an adaptation of the filmmakers’ successful play.

It conjures up effective scares per case, but later transforms into a hazy, befuddling story that diminishes its individual tales.

The draws here are Freeman (“The Hobbit”) and, to a lesser extent, Lawther (“The End of the F***ing World”). Both actors are impressive in their respective arcs, their once-unbothered characters teetering between control and madness.

Nyman himself is convincing as a skeptical investigator—he also gets to feel bewilderment and experience, well, ghosts from his past.

It’s easy to imagine how the film might have worked before as a play, because of certain translatable imagery and concepts.

Most of the time, the scares are authentic and unnerving, but you can’t help but feel conned: Instead of giving cohesion, the last 15 minutes immutably disrupt, as the film just morphs into a bad episode of “The Twilight Zone” or “The X-Files.”