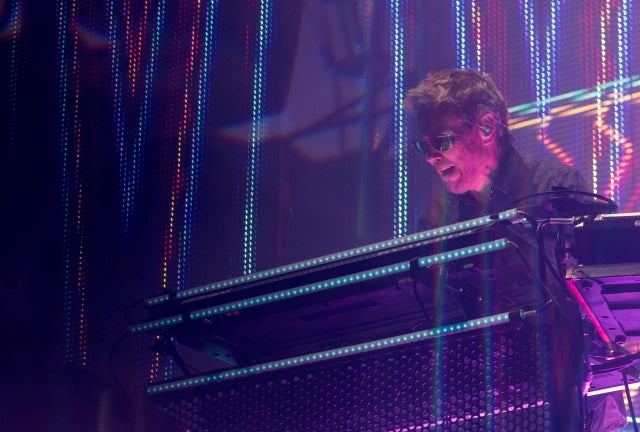 The Weeknd brought a raw emotional intimacy as he headlined the first night of the Coachella festival, where electronic music pioneer Jean-Michel Jarre lit up the California desert sky with lasers and calls to safeguard the environment.

Packing 125,000 fashionably dressed fans onto the sun-baked site in Indio, Coachella has become the titan of music festivals and a global brand with a who’s who of acts who play back-to-back weekends with identical lineups.

Just two weeks after his surprise release of the six-track “My Dear Melancholy,” which became the shortest work to top the US albums chart in nearly a decade, The Weeknd delivered a well-received set of hits and new material.

“My Dear Melancholy,” the comma deliberate, as if part of a confessional letter, shows a newfound introspection on the part of the 28-year-old R&B sensation, moving beyond the bravado of some of his early hits.

Clasping the microphone before the packed main stage audience, The Weeknd gently cried as he closed his new song “Call Out My Name” to an unadorned guitar, with some fans watching agape as the lights went down.

The song, which begins with “We found each other / I helped you out of a broken place,” has raised speculation that the Canadian singer is reflecting on his short-lived romance with pop star Selena Gomez, with whom he was spotted cuddling a year ago when they attended Coachella as fans.

Fresh from an expansion of the grounds last year, the 2018 edition of Coachella brought in a new artisan food market and original artwork, including strikingly translucent baroque domes by Italian sculptor Edoardo Tresoldi.

As the party entered the evening, few appeared to react to news that Western nations had launched strikes on Syria, with smartphones omnipresent but often patchy in data service.

But Jarre injected some political consciousness as he performed after sundown, his lasers beaming deep into the sky over the festival.

Walls of light surrounded Jarre, seemingly trapping him on stage, as Snowden appeared on video, delivering his lecture from the song about the importance of privacy, a message all the more timely amid the furor over Facebook’s harvesting of personal data.

Jarre also made an appeal on the environment, saying that “Oxygene” — the French artist’s 1976 album that quickly became a foundational work of electronic music — amounted to a reflection on climate.

“Tonight from the desert of Coachella, let’s have a strong message to every world leader in their right mind — we want them to take care and protect the future of our planet,” Jarre said.

Jarre has led some of the largest concerts in history, including a 1997 light show across Moscow, but had played little in the United States until last year.

Speaking to AFP before his set, Jarre said he was drawn to Coachella in part through his fascination with deserts and water scarcity.

“It’s what I like in life — to try to explain a new thing, and being in a festival like this is a new thing,” he said.

“You can’t compare any festival in the world to Coachella. It’s like a town in the middle of the desert, a town of music.”

Jarre said that Coachella chief Paul Tollett had agreed to all of the artist’s requests for coming to the festival, including extending the size of his stage.

Another ambitious performance came from the indie rocker St. Vincent, who designed nearly Dadaist imagery to accompany her band’s set.

During one song, St. Vincent appeared on a video to be staring down a decaying apple and strawberry, while in another, her mouth was drooling a deep green syrup that matched the grasshopper on her hand.

Coachella also marked a return for Jamiroquai, the British group whose trippy brand of funk-pop brought them fame in the 1990s with tracks such as “Cosmic Girl” and “Space Cowboy.”

Playing its first show in the United States since 2005, Jamiroquai found an enthusiastic crowd of dancers who erupted in joy upon seeing someone else on stage: rap great Snoop Dogg, whose most notable connection to Jamiroquai is a shared love of marijuana.

Another major figure in rap, Tyler, the Creator joined Kali Uchis, the Colombian-born singer who put on a well-received set of both English and Spanish pop. NVG