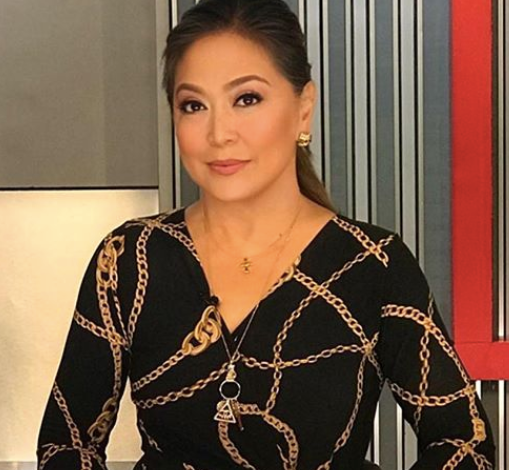 Seasoned Kapamilya broadcast journalist Karen Davila shared the latest update she got from the Department of Tourism (DOT) following the surfing accident involving her son in Siargao.

In her Facebook post on Friday, she thanked DOT Usec. Kat De Castro for the agency’s quick response.

In Davila’s shocking lengthy post on social media regarding her son’s accident,
among her major concerns was the lack of professional certifications the surfing trainers should possess while performing their duties at the popular tourist spot.

Indeed, the DOT’s investigations proved so, “The surfers referred to you by Isla Cabana, as per our Regional Director, are not DOT-Accredited.” 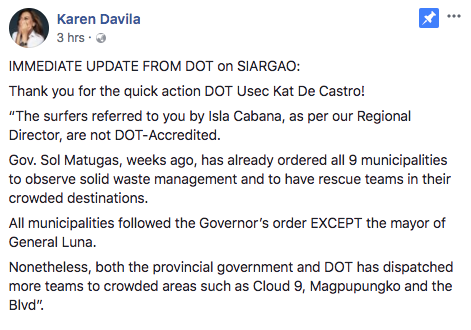 Furthermore, Siargao Gov. Sol Matugas, weeks ago, already “ordered all 9 municipalities to observe solid waste management and to have rescue teams in their crowded destinations.”

“All municipalities followed the Governor’s order EXCEPT the mayor of General Luna,” she continued.

In Davila’s story, there was no immediate first aid or medic on standby in the area.

“No one was there to assist my husband or my son who was bleeding! No nurse, no first aid, NO ONE,” she said in her previous post.

“Nonetheless, both the provincial government and DOT dispatched more teams to crowded areas such as Cloud 9, Magpupungko and the Blvd,” she closed.

On Friday, Davila made a shocking narration of her son’s accident while learning how to surf in the popular surfing capital.

Last March 28, her whole family including her husband DJ Sta. Ana and sons David and Lucas flew to Siargao for a Holy Week vacation. Upon arrival, she immediately booked surfing lessons for her sons.

It only took half an hour for David to go to her and say “Mom, I had an accident!” Speechless and in disbelief, she saw her son “bleeding from crisscrossing abrasions” as if caused by a small sharp knife.

Apparently the wounds were caused by contact with reefs situated in the shallow parts of the beach.

With no medical facility on standby, resort owners volunteered a van to take them to the nearest hospital.

A worried mom and an influential broadcast journalist as a lethal combination, she did not let the chance pass to talk to General Luna’s town mayor Jaime Rusillon and his daughter Dra. Romina Rusillon.

According to the mayor, such poor facilities–or even the lack of it–is mainly because the town is a “5th class municipality and we lack doctors, and we are not ready for the influx of tourists, we were shocked.”

The statement of the mayor quite contradicts the order of the governor to ensure presence and availability of “rescue teams” in crowded destinations in the province. /jpv