On the ‘Avengers: Infinity War’ set with Cumberbatch, Downey and more 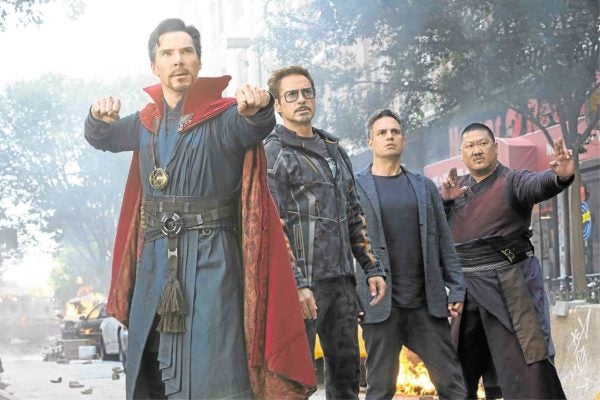 Robert, humorous and irreverently candid as usual, set the tone of our rambling conversation. The much-awaited movie, directed by Joe and Anthony Russo, opens in the US in April.

We were told that the scene today involves you and Robert Downey Jr. as stowaways on a ship. How interesting is that for you, acting-wise, since there are no special effects involved?

Tom (T): When you put Robert and me in a room when there’s not much going on, it’s a recipe for disaster because we like to improvise, try new things and come up with new stuff. But it’s a lot of fun.

What’s cool about these films is while there are huge set pieces and massive action sequences, the writers are clever enough to allow moments where the characters can shine just for being the characters that they are, without all the super special effects and big stunts. It’s a real character scene between the two of us.

It’s interesting to see that you’re wearing the motion capture outfit. Do you only have to wear half of your Iron Man suit?

Robert (R): I wouldn’t be caught dead in one of these. Look, it makes a lot more sense why Tom’s wearing one.

Because it’s all reference.

T: When you are on a motion capture stage, that’s when it’s most important.

R: Here’s what I would say about today, too. He (Tom) comes in, hot off establishing that he’s not just a rock ’n’ roll wonder kid. Right now, he’s also off doing another movie. They put you (Tom) in a tracking suit and you’re wearing that hair piece all of a sudden.

T: The reason I’m wearing the wig is because I’m on another movie with much shorter hair. It’s not in tune with what Spider-Man looks like at all.

R: The wig is reference.

Is the wig method?

We have seen the Iron Man and Spider-Man mentorship. How does that relationship evolve here?

T: I don’t know the answer to your question because I haven’t read the [entire] script. I just know what we shot today.

R: Act three is what the Native Americans would call “a great mystery right now.”

Have you read the entire script?

Benedict (B): Yeah, that was an amazing 20 minutes. I know the rough shape of the script.

The writers said they were excited to see Dr. Strange and Iron Man go “goatee to goatee.” What’s happening there?

B: It’s been a great working experience. I hope fans are looking forward to those two characters meeting, clashing and maybe cooperating a little. They’ll get a little of that.

There are crossovers, but they’re at very different points in their story. So, it’s hard to tell you anything without revealing something.

R: Benedict genuinely cares a hell of a lot still. So, to me, it’s just reenergizing all those things.

R: The more space I make for these other characters, the dumber I have to become.

Now, Quill (Chris Pratt) is the snarky one, and Thor (Chris Hemsworth) might be back on the sauce.

Do you share your ideas with the writers—about your character, where he’s heading and all that?

B: The Russos are magnanimous about admitting the fact that they’re in charge of the whole franchise. We’re into our deeper group. I’m looking after that bit of mosaic which is a thousand pieces, large and …

R: It’s about as functional as the UN.

B: As far as the integrity of the character, his legacy and where he’s going, I’ve been asking lots of questions based on that. We’re serving a story, something that catapults all of us into jeopardy that is unusual in every way.

R: Dr. Strange is funny. He’s a lot more tolerant than I thought he would be.

B: He is. He’s a bit more the grownup in the room. I’ll give that much away. He tries to be the more mature of the two of them (Dr. Strange and Iron Man), but he doesn’t always succeed. Dr. Strange is a master improviser.

R: Just always talking about what it should be. By the way, anybody can call in an idea and we get a reaction. But I love Dave’s. (To Benedict) He just got you laughing in stitches about 20 minutes ago, didn’t he?

T: Dave is the funniest.

R: It’s like a weirdo writers’ room. Everyone has different sensibilities. But to answer your question for real, it’s not like blow off. There’s no chaos here.

There are individual discussions where it’s not like they’re only telling us what we need to know. It’s not some control game. It’s that we know exactly what the arc of act three is. Because it so relates back through the whole last 10 years of all the stuff that shouldn’t have been secret.

This stuff is pretty secret because it’s revelatory and yet we all individually know what it is.

We don’t know the fleshed-out version of it. Anytime a scene comes along, we go, “Wow, this is pretty good. Let’s rewrite it for no reason,” and we do.

Will there be a melancholic touch because we are finishing a chapter of “The Avengers”?

T: I hope not. I still have two movies to do.

R: You don’t want to join a franchise ball team when it’s waning. But now is the time with all the infusion of the new franchises, different characters, the Guardians and all that stuff, there’s a massive sense of transition here.

I always get melancholic about anything that’s changing, whether it’s good or not. It’s not going to be like it used to be when we were holding hands around the campfire singing “Kumbaya.” No, it isn’t.