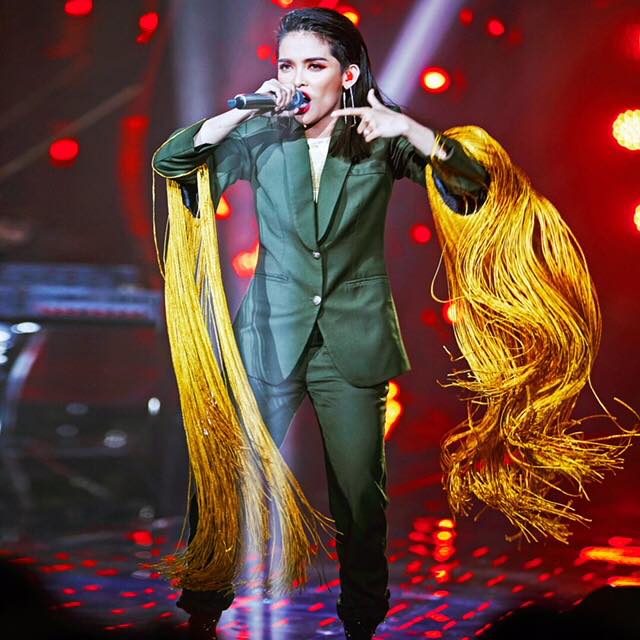 KZ Tandingan has been eliminated from China’s reality singing competition “Singer 2018” after wowing millions of viewers since February.

Tandingan, the only Filipino contestant, turned heads when she made it to the top in her first episode with a unique rendition of Adele’s “Rolling in the Deep”.

In the following weeks, she performed a Chinese medley and earned praise from A Great Big World for her cover of their song, “Say Something”.

However, she scored in the bottom three later on for Sheryl Crow’s “Real Gone”. She was booted from the show during the ninth episode when she performed Lorde’s “Royals”.

KZ Tandingan performs Royals by Lorde for the 9th episode of the Singer 2018. Our pride spits fire! 🔥🔥🔥#KZDiPasisiil #LabanKZ ❤️🇵🇭

Tandingan gave a heartfelt farewell to fellow contestants. “I never imagined I could get this far. I only wanted to stay for one show,” she said. “My tears are a mix of happy tears and sad tears because I’m going to miss all of you.”

British pop singer Jessie J, whom Tandingan considers an inspiration, told her, “You’re amazing… Let’s do some work together. I’d love that. You’re a star, like really, truly.”

The 26-year-old singer left with her head held high. She vowed on Twitter, “I’m going home tomorrow with a happy heart. This won’t be the last time the world will hear a Filipino sing her heart out.”

I close my eyes because faith is seeing for me. I did everything I could, but the results are out of our control. Im going home tomorrow with a happy heart. This won’t be the last time the world will hear a filipino sing her heart out. Thank You Lord! Mabuhay ang Pilipinas!☺️

“KZ gave it her all. As you can see in the video, she was on fire and her connection with the band and the audience was solid,” he wrote in a Facebook post last Friday, March 16. “But by this time we’ve also learned to accept the fact that aside from the performance itself there are a lot of other factors in the competition that are beyond our control.”

However, he hinted there was more beyond the elimination: “Is this the end of the road for KZ in this competition? We all would just have to wait for the twist.”

While fans would be pleased to see her stay in the competition, Tandingan’s run has shown her mettle as a rising star. JB