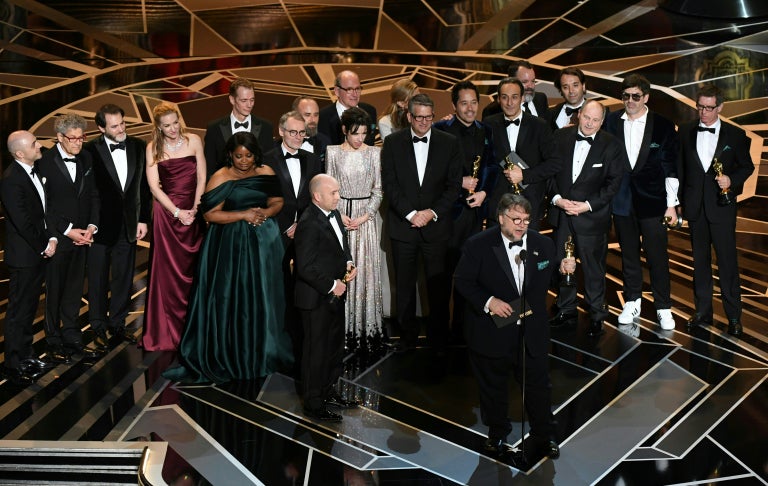 Mexican director Guillermo del Toro (C) and the cast of “The Shape of Water” at the 90th Academy Awards, March 4, 2018. Image: AFP/Mark Ralston via AFP Relaxnews

Just as the Independent Spirit Awards were shaping up to become the most reliable indicator of Oscar Best Picture success, “The Shape of Water” broke the charm and sent data-tracking soothsayers back to two more traditional awards galas.

Taking place the day before the Academy Awards, the Independent Spirit Awards have long been viewed as an alternative to the tastes of the Academy, picking the best from a selection of more under-the-radar titles, each released without major studio backing.

Throughout its early history, only on rare occasions had Film Independent voters even been able to choose a Best Picture winner that was also under consideration for the Oscars’ prestige equivalent; in the 15 years following the first Independent Spirit Awards it happened only once, when “Platoon” was not just a double Spirit and Academy Award nominee but Best Picture winner at both ceremonies.

In stark contrast, there has been a marked increase in overlap since the turn of the century. Most notably, the Spirit Awards’ Best Picture became the Oscars’ very same on four of four consecutive occasions since 2014: “12 Years a Slave”, “Birdman”, “Spotlight” and “Moonlight”.

The sequence was all the more remarkable because the most traditional indicators of future Best Picture success, the Directors Guild and Producers Guild awards, were proving less reliable. All three plumped for “Birdman” in 2015, but the ISA’s “Spotlight” and “Moonlight” picks carried over to the Oscars in years when the DGA and PGA both looked elsewhere. Only thrice had both the DGA and PGA failed to foresee the Oscars’ Best Picture success, and two of those occurrences came two years on the trot.

But normal service has resumed, at least for now, with 2018’s Independent Spirit Award for Best Film going to Jordan Peele’s directorial debut, “Get Out”, while the Best Picture Oscar went to DGA and PGA pick “The Shape of Water”. JB