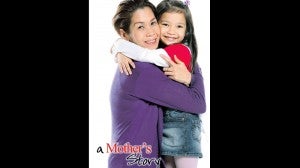 ACTRESS-TV host Pokwang admits she still harbors ill-feelings toward her ex-husband who abandoned their children, forcing her to search for greener pastures overseas.

“I’ve already forgiven him, but I’ll never forget what he did to me,” Pokwang tells Inquirer Entertainment.

Pokwang, Marietta Subong in real life, was referring to the heart-wrenching incident leading to the death of their 5-year-old son in 1998 due to brain cancer.

“I was working in Abu Dhabi then,” she recalls. “I didn’t have enough money to come home. I begged him to help me, but all he said was that he’s cutting off ties with me since our son was already dead. I never got to see my son’s body again.”

Pokwang’s real-life experience is similar to the story of the character she portrays in the John D. Lazatin drama “A Mother’s Story,” which premieres in theaters on Jan. 8.

“I would always feel hurt whenever I come home and find my children too aloof,” she relates. “I kept asking why they’re behaving this way, considering that I worked really hard for their future. It was while working on this film that I finally understood my kids’ behavior. I realized that I reacted the wrong way and should have been more patient with them.”

In this film, Pokwang plays Medy, a makeup artist given a chance to accompany a concert artist to perform in the United States. She promises her two kids she would return in a week.

However, while in America, she crosses paths with former classmate Helen (Beth Tamayo) who convinces her to stay — as an illegal alien. After all, the family needs a big amount of money to bring her daughter Queenie to the hospital.

Medy comes home seven years later. Her son King (Rayver Cruz) struggles with resentment, shame and anger caused by her return. Queenie sincerely wants to get to know her mother, whom she thought would one day come out of a balikbayan box. As for her husband (Noni Buencamino), Medy discovers something she least expected.

“No less than ABS-CBN chair Gabby Lopez picked Pokwang for this project,” says writer Senedy Que. “Being an OFW herself already gives her that edge. What happened to her in real life was actually much worse than what happened in the story.”

The film, financed by The Filipino Channel (TFC), is currently making rounds in theaters in the United Arab Emirates, United Kingdom and the United States. “The producers were encouraged by the audience’s reaction and are planning to make more movies after this,” says Que. “There are a lot more stories to be told of children, fathers and siblings of OFWs.”

He adds: “It’s Pokwang’s time to shine. Nora Aunor made an OFW film, ‘The Flor Contemplacion Story,’ in 1995. Vilma Santos did ‘Anak’ in 2000. Eleven years later, Pokwang comes up with this. We want to update the stories of OFWs. A lot has happened including the 9/11 bombing that brought major changes.”

In spite of favorable reactions from viewers abroad, Pokwang says she’s still nervous to know how the local audience would react to the film. “I kept thinking, people know me as a comedienne, so how would they respond to seeing me doing drama? It helps that I’ve done five episodes of ‘Maalaala Mo Kaya.’ I learned a lot from the experience,” she says. “Even though I gave this project my all, I’m still feeling the pressure.”

Pokwang claims she is not expecting an acting award for her performance. “Our focus right now is to let the people know that a film like this exists. We want to open the eyes of OFW parents about the repercussions of leaving their kids alone at home. We also want to teach kids of OFWs to give importance to their parents’ hard work.”