The early stages of dating can be formulaic, if not predictable; there are the pakipot hushed calls, flirty exchange of text messages, the mandatory flowers and candlelit fine wine-and-dines. But for actress Agot Isidro, who turns 52 this year, these trivialities seem to hold no water for her anymore. Or, perhaps, she is just too dense to notice.

Isidro further elaborated that she prefers a guy who verbally expresses his intentions when courting her, instead of just giving her feelers.

This doesn’t mean that Isidro doesn’t have time for dating or love, though. These days, the love affair keeping her busy seems to be her upcoming film “Changing Partners,” which is set to be shown in theaters this Jan. 31. Isidro plays a career-oriented, 45-year-old woman named Alex who falls in love with a younger man and a younger woman. 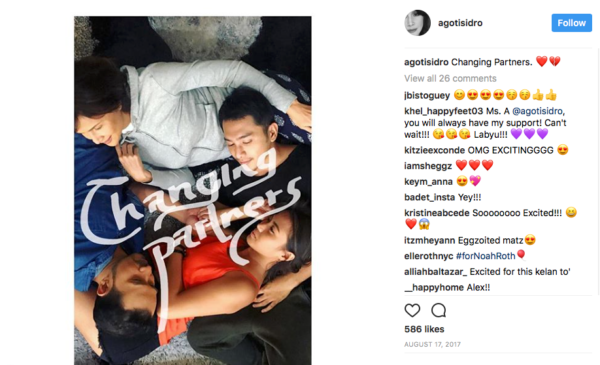 Although Isidro’s role involves a lesbian affair, she mentioned that in real life, she is as girl as a girl can be. “Girl na girl ako eh,” Isidro answered when asked if she’d consider dating a lesbian.

Isidro shared, however, that she has a lot of friends in the LGBT community.”I have very strong relations, relationships, friendships with any of the sexes or gender,” emphasized Isidro. “Ang dami na ngayon, eh. Meron pang questioning, merong LGBT, may fluid, may pansexual. Hindi ako judgmental sa ganun.”

(There are so many nowadays. There are those who are still questioning, there’s LGBT, there’s fluid, there’s pansexual. I’m not judgmental when it comes to those.)

As “Changing Partners” comes to the fore this month, so does Isidro’s latest project, ABS-CBN melodrama teleserye “Asintado.” In a recent Instagram post, Isidro shared a photo of her with her “Asintado” co-stars.