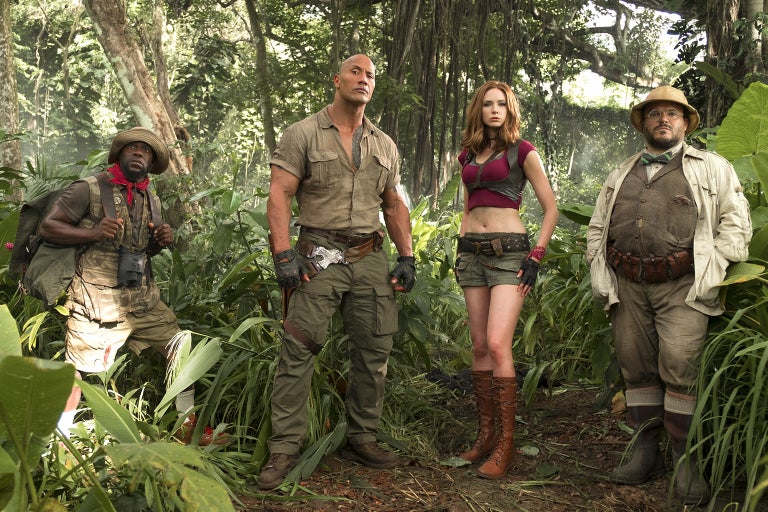 “Jumanji: Welcome to the Jungle” took the top spot at the North American box office this holiday weekend. Image: 2016 CTMG. All Rights Reserved

Sony’s family-oriented movie “Jumanji: Welcome to the Jungle” staked out the top spot at the North American box office this holiday weekend, gripping first place for the second straight week.

“Jumanji,” starring Dwayne “The Rock” Johnson and funnymen Jack Black and Kevin Hart, was expected to net $33.4 million over the Martin Luther King Day weekend, bringing its domestic total to $289.5 million in its fourth week out, according to industry tracker Exhibitor Relations.

The film follows four teens who find themselves inside the video game world of Jumanji.

In second place was Fox’s “The Post,” slated to pull in $22.2 million over the Friday-Monday MLK weekend after heading into wide release.

A critically acclaimed film starring Meryl Streep and Tom Hanks, the political thriller recounts the nail-biting behind-the-scenes story of the 1971 publication by The Washington Post of the Pentagon Papers, which exposed the lies behind US involvement in the Vietnam War.

“The Commuter,” a new action thriller from Lionsgate, was set to take $16 million in its first week, putting it in third place.

In the film, a man played by Liam Neeson takes his regular train ride home and is unwittingly enticed into a murder conspiracy by a mysterious woman, played by Vera Farmiga.

Fox’s “The Greatest Showman” and new live-action animated comedy “Paddington 2” were projected to tie in fifth, both set to nab $14.5 million.

“The Greatest Showman” stars the popular Hugh Jackman in the lead role, and tells the story of larger-than-life circus impresario P.T. Barnum.

The second “Paddington” installment, which features Hugh Grant, sees the beloved bear wrongfully convicted of stealing a book and jailed. He and some new inmate friends organize a prison break, vying to unmask the real thief.

‘The Expendables 4’ may be back in production