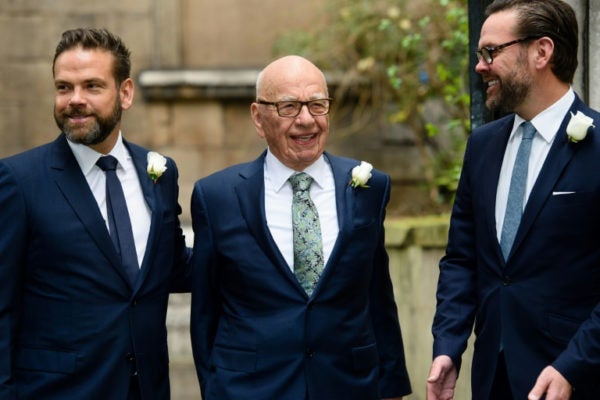 Walt Disney Co. on Thursday agreed to buy key film and television operations of 21st Century Fox in a $52.4 billion stock deal that could reshape the media-entertainment world and step up a challenge to Netflix and emerging tech platforms.

“The acquisition of this stellar collection of businesses from 21st Century Fox reflects the increasing consumer demand for a rich diversity of entertainment experiences that are more compelling, accessible and convenient than ever before,” said Disney’s chief executive Robert Iger in a statement.

Disney has been seen as trying to bolster its Hollywood and television positions by acquiring the Fox library of content to strengthen its arsenal against Netflix and other rivals.

The rise of streaming services and the so-called cord-cutting movement against cable television, together with declining advertising revenue, have contributed to a rapidly changing landscape for media companies.

Disney, which owns the ABC television network, ESPN and has major studios in Hollywood, is set to launch its own streaming services aimed at competing against Netflix and Amazon.

The deal would expand Disney’s global footprint with Fox’s 39 percent share in the European pay TV service Sky. Fox has been seeking the remainder of Sky but has faced regulatory scrutiny in Britain.

It also gives Disney a controlling interest in Hulu, another popular streaming service.

Analysts have said the deal could face considerable scrutiny by antitrust regulators because of the tie-up between two of the largest film and television groups.

The news comes as another major media deal, between AT&T and Time Warner, has been challenged in an antitrust filing by the United States Justice Department.

Prior to the deal going through, 21st Century Fox will transfer the Fox Broadcasting network and stations, Fox News Channel, Fox Business Network, FS1, FS2 and Big Ten Network into a newly listed company that will be spun off to its shareholders.

Rupert Murdoch said in the statement issued by the companies: “We are extremely proud of all that we have built at 21st Century Fox, and I firmly believe that this combination with Disney will unlock even more value for shareholders as the new Disney continues to set the pace in what is an exciting and dynamic industry.”

A separate statement from the Murdoch-led group said the “new Fox” would be “a growth company centered on live news and sports brands, anchored by the strength of the Fox Network.”

“The new Fox will draw upon the powerful live news and sports businesses of Fox, as well as the strength of our broadcast network,” Rupert Murdoch said.

It will also include broadcast and cable rights to sports from the National Football League, Major League Baseball, World Cup football and Nascar.

“It is born out of an important lesson I’ve learned in my long career in media: namely, content and news relevant to viewers will always be valuable.”

The deal has sparked speculation that Murdoch’s son James would play a key role at Disney, but there was no announcement in the release on that.

Iger, speaking on ABC’s Good Morning America, said James Murdoch would be “integral to the integration process” and added that there would be discussions “whether there is a role for him or not at our company.”

Rupert Murdoch, an Australian-born U.S. citizen, has built up a vast media-entertainment empire over the past decades.

In 2013 he split off the newspaper publishing group which retained the original name of the group, News Corp., making 21st Century Fox an independent entity.

Murdoch began a gradual withdrawal from both companies in 2013, and now shares the title of chairman with his eldest son Lachlan at both firms. JB