This is she: Keala Settle–remember the name | Inquirer Entertainment

This is she: Keala Settle–remember the name 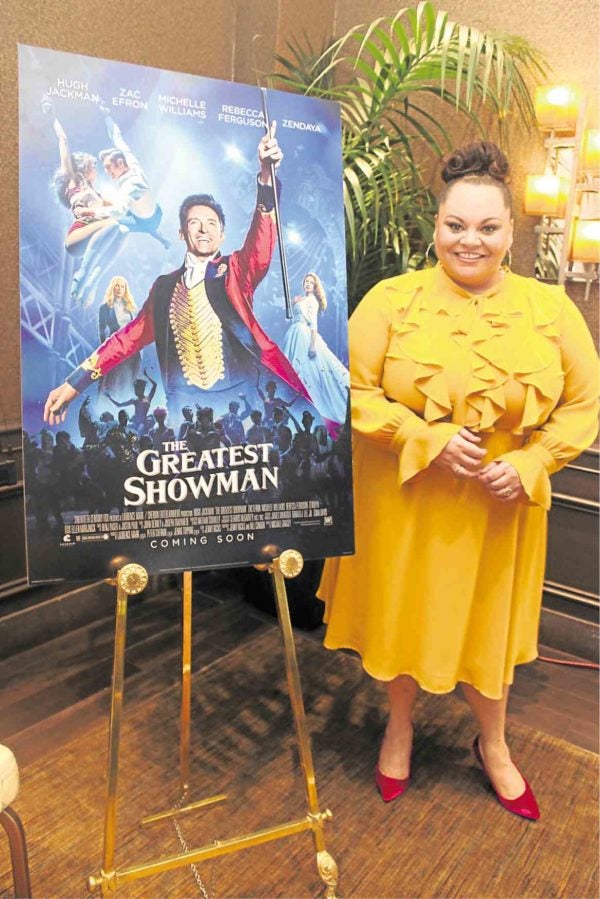 LOS ANGELES—Early this year, when we were on the New York set of Hugh Jackman’s “The Greatest Showman,” Keala Settle stunned us as The Bearded Woman belting “This Is Me.”

We wrote in June: “You heard it here first: We think Keala Settle … will be a star when the film is released on Christmas Day this year. We watched footage of Keala singing ‘This Is Me,’ which we predict will be one of the musical’s powerful showstoppers.”

Cut to the end of year. We saw the finished version of Michael Gracey’s “The Greatest Showman” and recently watched Keala perform “This Is Me” live for the first time. Keala was just as powerfully moving as she was the first time we heard her croon Benj Pasek and Justin Paul’s commanding anthem of pride and defiance amid challenges:

“I am brave, I am proof/I am who I’m meant to be, this is me/Look out ’cause here I come/And I’m marching on to the beat I drum/I’m not scared to be seen/I make no apologies, this is me.”

“The Greatest Showman” is Keala’s second film. She debuted on screen in Meryl Streep’s “Ricki and the Flash.”

The Hawaii native explained her screen name. “Keala is actually my middle name. It means the pathway in the clouds, hold in the arms of heaven. ”

She also cited her heritage. “My father (David Settle) is from Alden, England, and he lived in Lancashire. His mother’s sister ended up marrying a Samoan man in my hometown in Hawaii, which is how he got there. He’s a very humble and quiet man. He’s hysterical, very much like a Mr. Bean meets Peter Sellers. My acting and heart come from him. My voice comes from my mother (Susanne, of Maori descent from New Zealand). So it’s an even split—I like to think anyway.” 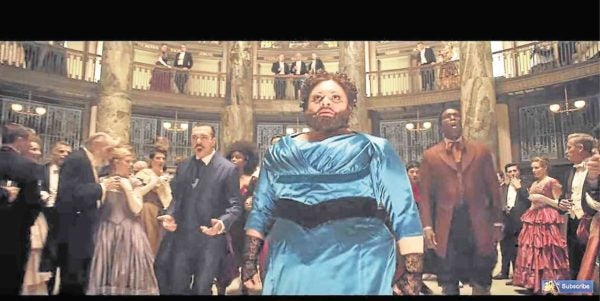 Keala Settle as The Bearded Woman in “The Greatest Showman”

How timely is “This Is Me” in this era when there seems to be a rise in exclusion and racism? “This Is Me” touches on so many levels, of inclusion and not only for physical traits but for those who can’t get into the country and for those who have families who are separated, for women and men who are struggling to find out who they really are.

There’s almost like a new renaissance of sorts. People are trying to get to the basis and the core of who they really are. They are also realizing that they can’t do it alone. The beauty of “This Is Me” is that it immediately asks you to join because my character (The Bearded Woman) can’t do it by herself and she never even tried to do it by herself.

How does “This Is Me” resonate with you personally? I am very close to my family. They mean a lot to me. We all come from a Polynesian background. And because we are half-caste—my father is from England and my mother was from New Zealand—we had our own struggles within our own societies which impact how I connect to the song “This Is Me.”

What was your audition for this movie like? It wasn’t an official audition. It ultimately came to fruition when I had to sing “This Is Me.” It happened in a very tiny room. There was a standing ovation. I was crying into Hugh’s chest because of how pertinent that song was to me.

How quickly did you learn that you got the part? I found out at the end of the reading (laughs) when Stacey Snider (20th Century Fox cochair) came up to Hugh Jackman and gave him a big hug. Then she looked at me and she said, “You are going to be in our film.”

What challenges did acting with the beard pose? The biggest challenge was to not only get through the prosthetics of the beard but you also have to act through that.

So I tried to use as much eye contact as I could, with Hugh, Zac, Zendaya and with the rest of the company involved.

What was it like when you put on the beard for the first time and you looked in the mirror? There were numerous times when I got really claustrophobic. I got scared.

When did you first realize that you have this beautiful voice? I knew that I have the voice when I was 2 years old because my poor mother could not shut me up. She would shove all of these musical films like “Grease,” “The Sound of Music” and “Bye Bye Birdie” in my face so she could just get me out
of her way because I couldn’t shut up. I just kept singing.

I have been hiding [my talent] until Jan. 3 of this year, which is when we started doing the photography on the “This Is Me” scene.

Many years later, since your mom couldn’t shut you up, how is your relationship with her now? Two years ago, my mom passed away. But don’t be sorry. I had to learn how to live without her and this film helped me do it. Hugh knows about it, too, because he was there when she was passing away. We were in the process of putting these presentations together. I had done everything for her in my life.

My mom and I were twins – the exact same people.  We fought like cats and dogs until the very end. When she passed, I looked at Hugh and I said, “I don’t know why I am doing this anymore.”  He said, “It’s not yours to worry about anymore. You need to just keep going.”  I didn’t know what he meant until we started working on this production.  That is when I said, oh, okay.

Can you talk about the good and bad choices you made in your career so far? Most of the good and the bad choices were based around the fact that I was hiding from my talent. At one point, I actually walked away from the industry and became a stagehand in San Diego. I spent about three years, loading and unloading Broadway show sets into the Old Globe Theatre because I didn’t want to be on stage anymore, I didn’t want to do it.

Did you have voice lessons? I studied in the shower (laughs) so my parents paid a lot of water bills for decades. I have a younger sister, Kelly, who sounds exactly like me.

And we sing so much. I also have [another] younger sister who sings as well.

Are you seriously aiming for a film career? I am aiming for the stars (laughs). I want to produce, to be able to make this kind of impact, through every medium of storytelling that I possibly can because we need it. I am in the process of making an album right now which will hopefully be done in the beginning of January.

I want to tour the world and sing in a pop rock album that will be on the radio. I want to direct. I am trying to create a TV show right now based on a documentary.