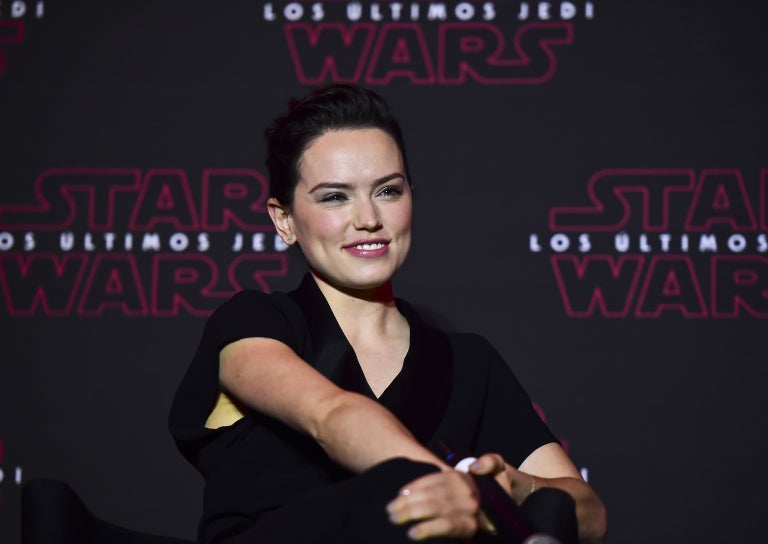 Daisy Ridley, 25, spoke of growing up in London in a liberal household where sexism wasn’t an issue — and of being overwhelmed by the rapturous response to her appearance as a rare female action star in “The Force Awakens.” Image:  Ronaldo Schemidt / AFP

Carrie Fisher’s death caused a huge disturbance in the Force, but the women of “The Last Jedi” vowed Sunday to honor her legacy in the latest girl-powered “Star Wars” chapter.

The cast came together in a secret location in Los Angeles with director Rian Johnson to build buzz for the latest chapter in the blockbuster space saga, which hits theaters on December 15.

“You get to see women that are not big and strong just because they’re acting like men. They’re doing something else,” said Gwendoline Christie, 39, who plays stormtrooper commander Captain Phasma.

“And also you’re seeing a developed character, or a developing character, that is showing some complex character traits. I’m delighted that something as legendary as ‘Star Wars’ has decided to reflect our society.”

“The Last Jedi” — filmed on the west coast of Ireland and at Pinewood Studios near London — sees the return of the characters introduced in 2015’s seventh installment, “The Force Awakens.”

Ridley, 25, spoke of growing up in London in a liberal household where sexism wasn’t an issue — and of being overwhelmed by the rapturous response to her appearance as a rare female action star in “The Force Awakens.”

“When I got involved, I knew it was a big deal, but the response was so beyond anything I could have imagined, that it was only afterward that I was like ‘Oh — oh yeah,'” she said.

Tran, 28, spoke of the “honor and responsibility” of playing a prominent female character and wanting to do the role justice.

“And the girls in this movie kick some butt. Every single one is so good,” she said.

Fisher — who played General Leia Organa when she was known simply as Princess Leia in the original 1977-83 trilogy — died last December, having already wrapped her scenes for “The Last Jedi.”

“I watched TV and film obsessively from such a young age, but [she] stayed with me throughout my formative years,” said Christie, who plays warrior Brienne of Tarth on HBO’s “Game of Thrones.”

“She’s really interesting, she’s really smart, she’s really funny, she’s courageous, she’s bold, she doesn’t care what people think, and she isn’t prepared to be told what to do.”

Written by Johnson, “The Last Jedi” — the eighth installment in the franchise — picks up where “The Force Awakens” left off, with Rey looking to Luke to teach her about The Force.

Lucasfilm has released various trailers for “The Last Jedi,” hinting at dark times ahead for the Resistance — and prompting comparisons with “The Empire Strikes Back.”

“It’s the second movie in the trilogy, and I think we’ve been kind of trained to expect it will be a little darker, and obviously it looks a little darker,” said Johnson, 43.

But he added that he was still aiming for movie that “makes you come out of the theater, run around your back yard, grab your spaceship toy and fly around.”

Hamill, 66, has stirred controversy in the past with candid comments about his thoughts on his character and direction of the story, but was one of the least vocal in the news conference.

He confirmed that his role was “twice as big” as his last-minute cameo in “The Force Awakens” — but gave almost nothing else away.

Like Fisher and Hamill, Harrison Ford is a “Star Wars” institution as loveable rogue Han Solo. But the character is missing from the latest chapter, having been killed off by director J.J. Abrams in the previous installment.

The cast was asked if the Ford’s absence was a wrench but Boyega said central characters Finn, Rey and Poe weren’t given much time to mourn and that “everyone’s keeping it moving” in the new film.

“It’s a dire situation, the Resistance is on its last legs,” added Isaac, who plays Poe.

“The First Order is right on top of us. You have to keep moving to try to survive.” AB